By 2025, it is projected, just over 6% of non-Māori women and 8% of non-Māori men will be smoking and about 19% of Māori men and women will still be smoking1. Some Pacific Island male and female sub-groups, LBGTQI and people some with mental health disorders will also be left behind2.

The Government is under a lot of pressure to reach the 5% goal. This is translating into a lot of pressure on people to quit. Cigarettes in New Zealand are among the highest priced in the world, relative to income. People who smoke or vape in their car when someone under 18 is present can now be fined! People who smoke are being discriminated against when they try to rent a home or when they apply for jobs! Many more stop smoking strategies are proposed. As New Zealand pushes harder and harder towards Smokefree 2025, we wonder: what’s it going to be like for someone who doesn’t want to, or who can’t, quit?

Over the next 4-5 years, we will be following 50 people who have no plan to stop smoking, or who think they will likely still be smoking in 2025. That is, they’ll be part of the 5%. You’ll be able to follow their stories here.

The Voices of the 5% participant stories are presented under a pseudonym to protect their identity. As far as we know the picture used with each story bears no resemblance to the participant as we conduct the interviews by phone.

Together, we will get to know the 5% and why they smoke. We’ll be updating their story every few months to learn about their experience as attitudes, towards people who smoke, change. We believe their voices are important as they are the group most impacted by the changes … and they are the group least likely to be consulted.

We hope health professionals, vape shop staff, stop smoking counsellors and journalists – anyone who wants to understand why it’s difficult to stop smoking, will find the Voices of the 5% website a useful resource.

As we will be catching up with every person in this study every few months, we have the chance to ask for their opinion on policy ideas and law changes. If you have any questions you would like us to include please email it to us for consideration at: info@voicesofthe5percent.nz 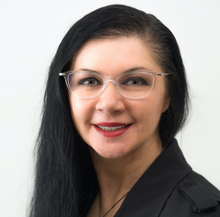 The study is led by Professor Marewa Glover (Ngā Puhi) of the Centre of Research Excellence: Indigenous Sovereignty & Smoking. Marewa (Ngā Puhi), the Centre Director, is a behavioural scientist with nearly 30 years’ experience in health promotion, policy analysis and research on why people smoke, and how to help people who want to quit. In 2019 she was one of three Finalists for the New Zealander of The Year Awards in recognition of her dedication to public health. The Awards committee were particularly moved by her courage to stand up for scientific truth in an era of misinformation.

A diverse multi-cultural and multi-disciplinary team are working with Dr Glover on the Voices study. Nearly all the Centre’s researchers are involved and additional people of varied backgrounds make up our panel of interviewers. The day to day co-ordination is handled by Emma Hurrell and we are grateful also to some fantastic graphic design, illustration and website development providers, including Lisa Grace of Burnt Orange Ltd who is helping with editing the stories.

This study is funded with a grant from the Foundation for a Smoke-Free World, a US nonprofit 501(c)(3) private foundation with a mission to end smoking in this generation. The Foundation accepts charitable gifts from PMI Global Services Inc. (PMI); under the Foundation’s Bylaws and Pledge Agreement with PMI, the Foundation is independent from PMI and the tobacco industry.

The contents, selection, and presentation of facts, as well as any opinions expressed on this website are the sole responsibility of the Centre of Research Excellence: Indigenous Sovereignty & Smoking and under no circumstances shall be regarded as reflecting the positions of the Foundation for a Smoke-free World, Inc.