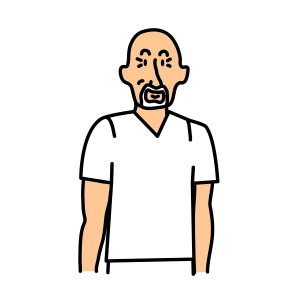 Andy is a 58-year-old New Zealand European man who lives with his adult son in a South Island town. He works fulltime and was an essential worker through the Covid19 Lockdown.

I think I was 15 when I started smoking. I actually read a book, Of Mice and Men, by John Steinbeck, when I was really young. There was a section there in the Depression where there was a group of guys under a train bridge and the way they worked themselves into this group of hobos was to pull out some tobacco and offer it round. I thought that was wonderful – a good way of breaking the ice with strangers who also smoked.

I just loved smoking. I loved seeing it on TV, loved the adverts and I knew I would start smoking at some stage. And, I was probably not with the best crowd of people in Melbourne, where I grew up. I sorta started smoking on Friday nights in town and then slowly started work and then started smoking with the guys at work, and have carried on smoking since. I just enjoy it.

I still only smoke about 5 a day. Sometimes less. I don’t smoke until after work at night. If I have a couple of beers on my last night of work, at home on my own, then I’d probably have a couple more cigarettes.

I’ve always enjoyed smoking. Used to be I’d smoke in a moment of stress or if I’m getting tired or quite wrought up - then I could pop away and have a smoke and that pretty much calmed me straight away. I notice that people who don’t smoke haven’t got that ability to wind down very quickly.

Sometimes it was family related, with the illnesses in the family, but usually it was work related - pressure at work. Like if you’ve had a troubling experience with a co-worker or the boss, you can pop away, have a quick cigarette and come back and you’re over it. Whereas other people will stew on it a bit longer. It’s probably anger - if I get angry I can just have 5 minutes alone and have a smoke, remove myself from the situation and it’s calmed me down, and then we can sort of work around the issue. Half way through a cigarette, within a minute, you’re on top of it and you can deal with it. Half of it is maybe the nicotine and I love the feeling of drawing something into my lungs. And half of it is removing yourself from the situation, and not thinking about anything – solves half the problem.

My brothers hate the fact that I smoke, they really do. I’m certainly very wary of smoking in front of them, they’re both real puritans. They hate it, hate it. We go away together to shows and various things and I don’t smoke. I just don’t smoke for a couple of days and then I catch up when I get home. It’s just one of those things that I just prefer doing on my own. It’s my ‘me time’.

I never smoke in public. I’m well aware of how it’s looked upon. So, I usually smoke at home.

Yes, I grow my own. I buy hollow cigarette tubes with a filter and grow my own. My father smokes a pipe, so I mix it in with his $100 tobacco. And so, it spreads it out a bit for him. He doesn’t notice the difference. He knows we do it, I give it to him, but he doesn’t notice the difference. It’s not fantastic actually. Home-grown stuff’s not that great. I’ve tried lots of things. I mature it. I age it. I flavour it. It’s just not the same. I’ve run out now and I won’t have any more for a few months, but when I do have it, it’s a treat to have a normal cigarette in amongst the home-grown stuff.

It doesn’t cost anything. I keep the seeds from each plant. The seeds are tiny like a speck of pepper and you get hundreds, thousands, off one plant when it goes to seed. The stuff is growing wild down the bottom of the yard now. It’s in a hot spot, sunny and sheltered, good soil and very warm. So, yeah it grows very well and there’s no cost at all to it.

I’ve never heard of anybody else growing any.

I quit once when I was probably about 19.  I went through a health phase for about a year of just eating vegetarian, not drinking and doing lots of exercise. I didn’t smoke a lot, so just quit cold turkey.

I used to have a smoke in the morning and then at breakfast about 20 years ago. Then I dropped the morning one and then I dropped the smoko one, and then the lunch one because they were just a habit and now just purely have the couple of enjoyable ones in the evening. I wanted to carry on, to keep smoking. And it’s like I don’t drink during the day, don’t have a drink for breakfast, so therefore I treat the cigarette the same way. It’s just a wee treat to be had at some stage and not a habit.

I very rarely go to a doctor.  And the times I do, they ask do I want to quit and I say no and I say I only smoke 4 or 5 on average. I keep quite fit, quite active, so I don’t think it’s a great issue with them. So, they give me the option and then drop it.

I’ve tried vaping and I sort of mix the 2 up a wee bit now. It’s just, there’s a little something missing. I’m not sure what it is, a little craving, but otherwise I quite enjoy it. I haven’t looked into whether the 4% is enough, it seemed quite a high one. Some of them have no nicotine.

I have always seen vaping as a means of getting off tobacco, not an alternative. I feel that the young guys who vape probably vape more than they smoke. They’ve just swapped 1 for the other and they don’t see it as a way to wean yourself off cigarettes.

I smoke cheaper brands now and I don’t smoke that much. I’ll just smoke the cheapest brand.

I can understand it. I can understand why the Government want to make cigarettes illegal and putting up taxes is the best way of doing it – it’s been proven. So, yeah I’m all for it, but I’ll carry on smoking them one way or the other. With growing my own, I’ll be fine.

Well, that’s in 5 years – they’ll probably stretch it out at that stage. There’s still a lot of people in rest homes, probably people like myself now, that in 5 years’ time might be in a rest home and would need the cigarettes and it would be worse on their health to take it away.

They’ll probably have cannabis then. So, you won’t be able to smoke tobacco but you’ll be able to smoke cannabis – I don’t know. I’m well aware that smoking at some stage will be outlawed, but it just seems for me a bit strange that they bring in cannabis at the same time as we get rid of tobacco. It’s just a strange anomaly, that we take one out and bring another one in. Argh, but I guess you just go along with it and, well, the circumstances.

I don’t smoke any cannabis so it doesn’t bother me that much. I would probably vote for decriminalisation if that’s what it is – allowing it to be sold or whatever it is.

Life is all good. I’ve stopped smoking and just vape a bit now.

About 5-6 weeks ago, my son bought me a vape kit. I had a go and thought, oh well that’s fine, so we’ll carry on with that.

I knew I would stop smoking at some stage. It was just a bit later than I thought. I thought it would’ve been 20 years ago.

It was just there was no difference between the smoking and the vaping. After vaping for a couple of days, I thought if I had a cigarette it would make me feel ill. So, I just never went back to a cigarette. And just that fact that my son bought the kit. I had to pay for it, but it was a nice gesture. And he had given up smoking a wee bit earlier.

I’ve still got a half packet of cigarettes in my drawer. When I tried the vape, it was fine so I just left them there and carried on vaping. I think my son uses them to roll his marijuana cigarettes.

So, yeah all of us – grandfather, father, son – all gave up within a number of months. My dad’s in a home now and doesn’t smoke at all. I used to mix my tobacco plants with his $100 tobacco to stretch it out. In the home he can smoke, but he doesn’t. He stopped just overnight. He’s 88 years old. I don’t think it was because of health issues, it was just the new surroundings. He used to have a smoke at a certain time and in the new surroundings the habits changed and there was no need for the pipe. That was a couple of months before I gave up. I never smoked in front of my Dad and he never really knew that I smoked.

When I had a cigarette, I’d smoke the whole cigarette. But when I vape, I don’t vape all the time. It’s a lot less time.

I use 4% nicotine tobacco. It has no flavour at all. It’s called Gold Tobacco but it doesn’t have a flavour that I’m aware of. It’s a pen style with pods that are pre-filled. I enjoy it, so it’s fine.

I’m not really interested in what’s in the vaping law. I figure vaping is treated the same as cigarettes – don’t vape at work, don’t vape in public places, do exactly the same as if it was tobacco.

When I went away with my brothers, I went to a no-smoking area to vape so they didn’t see it. But last night I had a few vapes while my brother was cooking the steak. I did that in front of him and there was no reaction. I don’t mind walking down the street vaping, but I’d rarely walk down the street and smoke.

I enjoy it. But it’s purely a personal thing. It’s not a social thing at all. It’s the simplicity of these pods. It’s so accessible and easy to use and discreet, yeah, it just makes a lot of sense. It’s better than the chunky things I tried a couple of years ago that I had to refill – it was just too messy and difficult.

They’re still growing. My son mixes marijuana in with tobacco to draw it out. The stuff’s growing so I just leave it there.

I’m doing financially pretty well with my son getting older, decent pay, mortgage interest rates down, there’s always money in there so it’s a non-issue.