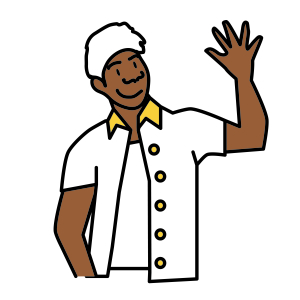 Tane is a 35-year-old Māori who lives rurally. He was seriously injured in an attack several years ago, but is finally able to work part time.

I’m lucky. I’m living near other whānau. My mum and dad live in the house in front of my little shack. Just me and my mum smoke.

I didn’t start smoking until 21. It was boredom. I was working minding a 16-year-old, high-risk child.  He was allowed $50 a week and he was allowed tobacco, believe it or not, at that time. I didn’t smoke or do anything. So, we were stuck in this house 24/7 for months on end, and from time to time he was like, “Wanna smoke bro? Wanna smoke bro?” You know, is that dumb? I regret the whole bloody thing. Bloody cigarette. He rolled me one and I said, “Okay I’ll have one.” And then it gradually moved on from there. Jesus Christ!

Working in the music industry, you could end up being a bloody chimney. When I used to get up earlier for work, I used to have a ciggie like at 6 in the morning.  Sometimes, I had one when I used to get up in the night to go for a bloody piss, I did that for several years. But I sort of got sick of it. I felt like I was smoking too much just for smoking’s sake. I actually like enjoying the cigarette. If you can space it out you actually enjoy it a lot better then.

The last few years, I’ve actually gotten better at it. I more or less want a ciggie after 9.30ish. Then I’m good for like one every 2 or 2 and a half hours.

I’m usually sitting on tailies, mainly because I can’t really afford to get the 50 gram the whole time – that’s like $100. So, I’m spacing out little taily packets.

I’ve been in rehabilitation since this guy tried to murder me. It’s been a bit slow and my arm still doesn’t do what it’s supposed to be doing on the keyboards.

After the attack, when I was in hospital, they tried to get me off smoking. They were hammering me with, “You’re not gonna get better if you keep smoking”.  They were saying, “Your arm’s gonna fall off”. That was more the scare for me. I didn’t touch any ciggies for a month, like they said, so the bone could repair itself. They kept on at me like that for a month. A stop-smoking service lady used to come round and hassle me all the time with her smoke-free stuff and trying to keep up to date on how I was. I was really hanging out. As soon as I got out of hospital, I went back straight to smoking. When I left the hospital, I just didn’t reply to her.

They gave me gum and patches. Those patches are worth like a $100 upwards in jail, depending on the day. Well that’s where they all ended up going – I was doubling my money. I mean, gee!

I tried to stop smoking when I went to jail one time, a few years ago. I actually went in with the mindset I was gonna clean off.  But when I got there everything was inside, so I didn’t bother.

I know enough now from my mates that have quit. They’ve all told me the same thing that if I want to give up I have to really, really want to. And at the moment I really don’t want to. I actually enjoy a cigarette sometimes. I’m not gonna waste my time trying to give up until I want to give up.

I tried growing my own, but it was too much hassle. Then I found out I could legally import tobacco in leaf form and the sweetener. I was allowed 5kgs max. Then I just had to get the stalks off. Yeah, there was a little bit of detail in it especially when you’ve got a big 5kg load. Then I had to mash it, mouli it down with an automatic blender and make sure I didn’t dice it down like too thinly. You want it more stringy – that’s what I noticed the customers wanted.

I did that for like 4 or 5 years, 2 or 3 times a year. The first couple of 5kgs I just smoked. Smoking normally, that lasted me 8 months. It was a beautiful smoke by the way. It had a nice, sweet taste to it – it was bloody yum.

But, I didn’t quite get the drying down properly – it still dried out a bit more than I wanted so it started burning a lot faster. That was my only bloody problem. I left it in a bloody cupboard one time for like a couple of months.  Came back and some of it was thick with mould. I had to keep it in the fridge to keep it moist. I wasn’t an expert in the matter, I was only just learning from other people that were doing the same thing. There were heaps of people doing it. So, after that I started selling a couple of bags just to buy me a proper packet.

Last year, that was my last load. You can’t import leaf no more because our country’s shut that down. I was like, oh ratshit.  See, the loophole was that 5 kgs, including buying it, pulling all that twig out, losing about 600-800 grams a kg, packaging it and moving it, cost $583. I was getting 32 x 50gram packs. Buying that would cost like $3000 or more.

Several years ago I had a try. I didn’t think much of it. And all I was doing was trying to get the bigger hit. I was always hitting them past 8 milligrams. But, I didn’t like the flavours. I like the taste of the tobacco. It just wasn’t my thing, I guess. Also, I heard some negative things. I can’t say I heard in detail what they were, but I just heard a couple of things. It would be a lie for me to say that didn’t influence me a little bit to stop it. Plus it didn’t feel cool, didn’t feel authentic. It’s different when you pull the smoke out of the packet and you light it. I actually enjoy that part of it, like when you’re making a cup of tea and you’re being thoughtful as you’re stirring it. I like the first puff, the ritual of preparing yourself for your cigarette. It’s probably half of the reason why it’s so hard to get off it.

They’ve had that in the planning for like the last decade, am I right? The truth – I just see the irony of how they’re trying to stamp it out one end but at the same time tax the other end, thinking that that’s gonna be the solution to stop people from smoking. That’s like telling one side guns are dangerous and then giving the other side the ammunition. I see the complexities of it. I don’t think it’s gonna work. It sounds like a joke.

It’s hard nowadays ’cause you’re a lot more mindful of civilians watching you in front of your kids. Or, smoking in the car and shit. You get these odd looks. I’m not gonna deny that you don’t feel it. It was a year ago when I first started feeling that type of stuff. About knowing not to start lighting up. I’m actually wary now, even in front of kids. I’d rather not.