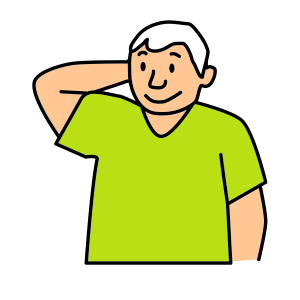 Bled is an 80-year-old Pākehā man living in the far North with his partner. They met during the Covid 19 lockdown. He stays active with tennis, fishing and fruit-picking at a local orchard.

I started puffing on butts when I was 4 and a half with my older brother who was almost 6. His friend, who was probably a year older than him, was a smoker. We grew up in a small place in Canada. My parents both smoked and they emptied their ashtrays in the fireplace. My brother and I used to dig in the fireplace after the parents had a party to see who could get the biggest butts. When I started school, I used to take butts in my shirt pocket and sneak down to the toilet and have a puff.  That was me in 1946, ha ha.

I got heaps of spankings. My mother used to say, “You've been smoking again”, and I'd be, “No, no mum, not me”, whack, whack, whack across the bum. I asked my mother, a couple of years before she died, “Mum, how did you know that I was smoking?” She said, “Well, because the only thing you could smoke was a butt and the only matches that we had in those days were great big wooden things and when you lit your butt it burnt your eyelashes.”

So, I’ve been smoking since 1945, at first just whenever we could get a butt. When I was 18, I started working on the tugboats. That’s when I became a regular smoker. You bought a tin of tobacco and took it with you and that lasted a month. Certain captains hated tobacco. They would never allow you to smoke anywhere near them, nor in the wheelhouse. You had to go to the stern of the boat to smoke, so I probably only smoked 4 or 5 a day. Since 1960, I’ve been smoking 20 a day, starting with my first cup of coffee in the morning.

I met my future wife during lockdown.  You weren't supposed to be going fishing, but I went. Anyways, down at the ramp where I launch my boat there was this woman standing there taking pictures. Don’t ask me why, I'll never know, I said, “Do you wanna come for a fish?” She said, “Yeah.” So, we went fishing, caught 13 snapper and of course being out there for a couple of hours, we got to know each other. We’ve been together pretty well ever since. We have a great life together. She loves fishing, she plays tennis with me, we bicycle ride, take the dogs for a walk on the beach. And, she’s a lot younger than I am!

I quit once. I got to a stage where I felt I was full. My body was just full. I took some pills. I forget the name of them now. I had to buy them on prescription and it cost. The pamphlet said you pick a date that you're going to quit and you work towards that while regularly smoking. Then on that day you start taking the pill. A week later you throw away your cigarettes, but you continue taking the pills. It worked for a year and a half.

Then I just felt like a cigarette again. So, I tried one. It was a bit of a jolt at first but I enjoyed it. I felt right at home so yeah, I've been smoking ever since – that was in 1992.

I had a call a couple of years ago from Quitline. They rang me a few times to give me support. And I thought, “Oh Jesus. I don’t need this.” I've never had a desire to quit again because I enjoy my smokes, especially after coffee, or dinner, or drinking.

No, what for? I'm not dissatisfied with my smoking.

I saw a lady from ASH on TV. Oh, it was a laugh. She said that these vape things, they're really great, they're really helping people quit smoking. And so, she’s all for them. Then she said she supports the government, which now comes out and say there will be no advertising for the vapes. Nobody under 18 will be allowed to buy them. But it’s the people under 18 that they need to stop smoking and unless they advertise the vapes, who’s gonna buy them? If you stop advertising, then there will be bugger-all sales and you're gonna kill the goose that was laying your golden egg.

My partner used to smoke, but she uses the e-cigarettes now.

No. Forget it. It won't happen.

They raised the price so much that I grow my own tobacco. I'm surprised that more people don’t grow their own, because for $260 you can produce your own tobacco and grind it up to a suitable size and you basically don’t have to buy any cigarettes anymore. The first year, I got seven kilograms of finished usable tobacco. But, when I get my pension once a fortnight, I save enough so that weekly, when I go to play tennis, I can buy a packet of tailor-mades. Tailor-mades are always sweeter.

A small percentage of people might be put off smoking by the tax increases. But, for some, the high tax means they're spending a higher percentage of their family money on taxes, instead of on food.

I get into a real argument with people about smoking. They say 5000 people a year die because of smoking. Well that’s not quite true. They die from heart conditions – some of them are brought on by smoking, some are just brought on by the wrong foods hardening their arteries.  They say it costs our healthcare system a lot of money - $246 million a year for these 5000 people that die. Well it doesn't. The taxes that we pay come to two billion dollars a year.

It doesn't equate. People that smoke die on an average 10 years sooner than other people. People in their late 60s and 70s and 80s go to the doctor way more often than young people.  They also need operations on their knees. They need eye operations. They have heart attacks. They need all sorts of operations costing the economy hundreds of millions of dollars. So, smokers save the healthcare system millions of dollars simply because they die sooner. The government should be saying everybody smoke up because it’s good for the economy.

Ban on smoking in cars with minors present.

I dunno. I smoked in my car. All of my kids are quite healthy.

It’s a totally useless law. Who’s gonna enforce it? Are you going to have a neighbour say ‘oh, I saw that guy smoking while he had children in his car.’? Who’s gonna admit, ‘oh yeah, I was smoking with my kids in the car.’? It’s none of their bloody business.

We smoke in my own home. Jesus! Of course I can smoke in there and I don’t stop other people from smoking either, except weed.

I tried it 40 years ago, but it did nothing for me, so I just gave it up. My youngest son was a real heavy user and he told me that because of his weed stuff, his memory was going. It affected his memory terribly and when he was a bit high, he used to run over some of his fishing rods, you know forgetting they were there, etcetera.  So, I don’t. Quite frankly I don’t think it’s a good thing, but then again I'm not a weed smoker.

The only chemical that was around when I was a teenager was heroin. The heroin didn’t really affect other people, whereas your weed, other people smell it. If people are driving, especially if they’ve got other people with them, like a bus driver, or a truck driver, I don’t think it’s a good idea to allow them to smoke weed. It does affect your brain. I don’t care what anybody says. I would be in favour of them decriminalising it, but I don’t think I'd be in favour of them legalising it.

Well, they changed the cigarette brand on me, which really pisses me off. They dropped my brand and brought out another – and they’re two entirely different cigarettes. So, I’m having to switch to another brand, as soon as they run out of my one. The packing of the cigarettes – how tight it’s rolled – makes a huge difference to a smoker. The looser it is, the stronger it is. There’s no difference in cost at this stage.

Two of my friends have quit smoking. They’ve changed to those puffer things. It’s not vaping. It’s called an Alt, a waffle puffer is what they call it [editorial note: this is a vape].

Before I retired, I was a security guard. My voice went about 1999. I went to a specialist and they could find nothing wrong. They said they could send me to another specialist other than the ear, eye, nose and throat one and I said, “Well that just cost me 250 bloody dollars, thank you very much, so no, I’m happy.” I can still speak. It’s probably deteriorated a bit over the past couple of years. I still find it difficult at times. I have to push from my stomach to speak. But, I’m not suffering. There’s no pain involved.