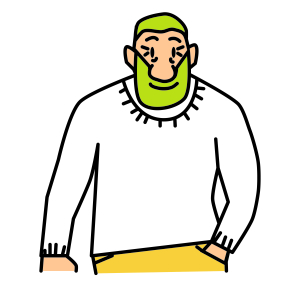 Nigel is a 41-year-old Pākehā man living in Southland. He’s unemployed and lives with his parents while dealing with his mental health. During the week he helps on the farm.

I didn’t start smoking until, I think, it would’ve been when I was 21. It’s not actually that I thought of taking up smoking, it was just ’cause I’ve had trouble with my mental health and I thought maybe it would help.

It was interesting when I first smoked a cigarette. Like after 1 cigarette I was on a complete high for about an hour or 2. I’d wander down to the beach and back and it would be really great. But that didn’t last forever, it lasted for about 50 or 100 smokes.

I’m working on a farm, unofficially. I’m unemployed while I’m dealing with my mental health. In the morning I take the dog for a walk because he’s got behavioural problems. I do that for about an hour. So I have 1 ciggie out and 1 ciggie back. With my psychological, mental health, I find it a bit tough getting up in the morning and getting out. Smoking helps with that.

I smoke 6-7 on a weekday and a bit more on the weekend if I go away. My dad’s got a very negative attitude towards smoking.

My present key mental health worker said if it wasn’t bad for your health, smoking would be an ideal mindfulness tool to help slow your breathing, and for doing simple actions and becoming more aware of your surroundings.

When I went to Sydney last time it was quite strange, because it had only just come in then and they didn’t have anyone vaping. People in New Zealand were vaping all the time.

I didn’t like the idea of it but I thought I would give it a try. But then I got one you have to plug in to a Playstation or something like that. I wasn’t comfortable with the idea of it setting it on fire or something – I was a bit worried. So I stopped vaping.

I’m a bit more traditional. Tobacco feels a bit more natural. I like watching tobacco burn down to the end. There’s a ritual involved.

The price is getting pretty exorbitant. I started off smoking tailor-mades but I smoke rollies now. They’re a bit cheaper and it lasts longer. I just get the cheapest. It’s something I’m resigned to. I’m on a pretty good wicket at the moment, though it would be nice to be able to spend that money on something else.

The mental health ward used to be the only place in the hospital you could smoke but in the end they did away with that too.

Last year, I ended up remanded in custody in prison and I didn’t have any money coming in. You actually had to get the money to pay for smokes. To get money to buy like extra rations, extra supplies, and cigarettes, I was doing dares like eating bugs and other people gave me cigarettes for the first couple of weeks.

One time, I was visiting Auckland and I had a wander around the casino. I don’t play pokie machines myself.  There was heaps of smoking outside in the smoking area, where it’s supposed to be. In one smoking area they had pokie machines and there was a guy playing pokies and smoking. As a smoker myself, I thought that must be the lowest of the lows you can get to – pretty desperate.

I go to a pub once a month. I’m in a choir. It’s quite funny because normally smokers stick together but often, now, I’m the only one. I have problems with groups and there’s a large majority of women there so it’s kind of uncomfortable. It’s a situation where I’d go outside to smoke, but now I don’t have anyone there to go for a smoke with. Times have changed.

They’ve got a very idealistic view of how its gonna work. The whole idea of making smoking illegal - I haven’t really thought about. I have assumed it will be a fine. But, also, I don’t know if it’s going to become a drug offence. I don’t know if it would be considered a drug internationally. I have travelled a bit. I’ve been in trouble with the police. When you travel, having had trouble with drugs is a pretty big deal. Another big deal going on my criminal record is something I would want to avoid. I am not too worried about fines. The one thing I have been worried about is how having a criminal record effects travel and getting jobs and stuff.

I don’t smoke drugs, as a general rule. I don’t smoke marijuana. I had an interesting experience with it that was quite bad.