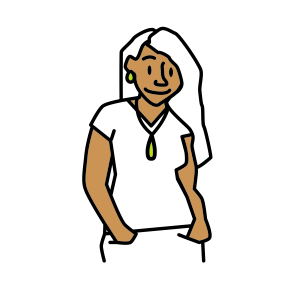 Tiana is a 29-year-old Māori woman living in Auckland. Monday to Friday, she is a manager in the childcare sector and works with Youth in the weekends.

I started smoking when I was 18. It was maybe a little bit of peer pressure, but I was fairly stressed and not coping very well with the things that were going on in my life. I was out with a friend, had some of hers and that was it.

No one really smoked around me when I was growing up. My mum was a social smoker, but I never really saw that. I only found out about it later. And my older brothers smoked but they weren’t living at the house at the time. I probably smoke a packet a day now.

I have tried to quit once and I went 2 weeks without a smoke. I had patches and gum and it just … I missed the habit.

Me and my mum – my mum smokes now – we sit outside and have a chat and talk about our day. When I quit smoking, she had to quit too. Then we didn’t really talk much anymore. We’d sit down for a cuppa but there was no smoking involved, so it was too short.

I still live with my mum and my dad. He’s a non-smoker – quite often he’ll send mum outside. Like, “Go and have a smoke with your daughter”. It’s become quite a little thing we do - smoking together and chatting about our day.

I think lots of people make an assumption that smokers just want to quit and so they’re trying to lobby and help us. But for me, I really don’t want to. I struggle with anxiety and depression, and all the things that health professionals suggest as coping mechanisms – I get all of that from smoking.
I get the deep breathing, I get to remove myself from stressful situations, I get to have a 10-minute time-out; something else to focus on instead of whatever it is that’s causing me anxiety. And 10 minutes after I smoke, I’m okay – back ready to face the world.

I’ve spoken to friends who are non-smokers who are super empathetic about it. Others with a lot of mental health issues say, you know, when you’re having an anxiety attack the last thing you do is meditate. And I agree, it’s really hard when you’re having an episode to be calm. I get that from smoking and I just am totally not going to quit anytime in the future.

I mean, there will come a time when the prices are just too much for me. Or, you know, something changes in my life where I’m forced to quit, but it’s probably not going to be by choice or a new year’s resolution.

I really struggled with it. I was supposed to go to America for a year. I’d quit all my jobs. I’d moved out of my place. I was really committed to the move overseas. I was there for 6 weeks when COVID hit and everything shut down. Then I had to stressfully try to get home. All my flights kept getting cancelled. I, luckily, made it home safely. I made it through isolation. I was fortunate enough to get work when I returned. And I moved back into my parents’ house because I’d given everything up.

I’m one of the very lucky few, but I didn’t come out unscathed. There’s not a lot we can do right now, but I enjoy smoking and it really helped in those 14 days of isolation where I had nothing to do and no one to talk to or anything else. I could at least go outside and have a smoke and my cup of coffee in the morning and stuff like that. I still feel like I’m one of the fortunate ones but, yeah, it wasn’t easy.

I did try vaping when I tried to quit but I coughed a lot on it, so I didn’t bother.

It’s definitely gone up. I’m not impressed. Really not impressed. I think it’s quite ridiculous. People who are already smokers are just going to be living in poverty. I don’t think it’s fair to be capitalising off a habit that studies have shown is so addictive.

But it’s a really good deterrent for non-smokers. People who were maybe thinking of taking up the habit, they’re not going to take it up because it’s so ridiculous at the moment.

Again, I’m not going to quit just because they’ve put the price up. And yeah, it is making it harder when it comes to making choices in other aspects of my life, like choosing healthier food over unhealthy food and going to the gym instead of going out and stuff like that.

Bans on where people can smoke …

I don’t smoke if there is a non-smoker in my car. I have quite a few friends who smoke in my car, and before anyone who is a non-smoker gets in my car, I’m like, “Oh, I’m probably going to smoke, so if you still want to ride with me ...” But if they’re young kids, I just don’t smoke, or I’ll wait to get somewhere. That’s all right. I’m okay with that. I’m not big on making other people smoke or even smelling the second-hand smoke. But I still think it’s my choice to smoke. So, if I’ve gone away – like outside my house – to smoke, I don’t think that’s anyone’s right to stop me.

I don’t think it’s very fair. I think it’s a little bit discriminatory, actually. I get making certain places smoke-free but I don’t know if you can just stop someone, especially someone who’s been smoking for a long time, and just say you’re not allowed to do that habit anymore when we’re currently trying to make marijuana legal and drinking is still legal and gambling is legal.

I voted yes. I was in support of it. I think it’s silly that we can end a life now, but we can’t ease the pain of a life. And, people are already smoking marijuana. The Government might want that to stop but there’s always other ways people can get it. Just dictating that it’s illegal … those that enjoy having a joint or a smoke – or whatever it is that they do – make it illegal and they’re most likely going to get convictions because of it. I think it’s just silly.

I’m still smoking. Not a lot has changed.

A lot of my friends and family smoke. We just go out and smoke and no one seems to mind. I find it a bonding moment. It’s a time to be together.

I’ve gotten closer to some of my siblings because we smoke. When I was little, they smoked and I didn’t. They’d go outside for ages, and they’d be talking about whatever and I wasn’t in on that, whereas now we all go out and I’m there for all the conversations. I like the social aspect and it helps people relax and there’s no judgment.

My mum switched to vaping, which I think’s really cool for her. She didn’t smoke very much. She only smoked socially so she still joins us and feels included.  She’s using the I-Q-O-S vape. It looks like a cigarette and feels like a cigarette but, at the same time, it’s got a little bit of nicotine in it but not that much. And it releases more of a vapour rather than a smoke. We still act as if she smokes.

She gave me a try, but I didn’t like it. It’s kind of like switching between blue and red in menthol. They’ve got, like, a taste to them I just didn’t like. But Mum does. She started on Christmas Eve and then on Christmas Day we all went outside for a smoke, and I naturally offered her a cigarette and she took it. She said it made her feel sick. So, she doesn’t smoke at all now. It really worked for her.

I like smoking. There’s a start, there’s a finish and I’m used to that timing. Whereas with the vape that she has, it was a funny 2 or 3 minutes tops, then you’ve got to charge it. It didn’t quite feel the same to me.

Lockdown means that the pre-school closes and I’m gonna get paid regardless. I can pick up other hours at my second job as a youth worker. They’re an essential service, open 24 hours, 7 days a week. So, I picked up extra hours with them and they were really grateful. I was really grateful 'cause I’m getting extra money. So, I quite like lockdown.

The young people in our care can’t go home. The youngest I’ve worked with was 7 years old and the oldest was 17. It varies. I had one girl whose social worker bought her smokes because she was an aggressive person and they did what they could to help keep her calm. One boy who’s not allowed to smoke, is being given patches and gum. Another youth smokes, and his parents buy cigarettes for him. Within the context of what we’re allowed to do, we can’t just take things off him that his parents have given him. Especially if it’s going to cause him to become escalated and end up hurting somebody, or himself.  We just note down, ‘He’s gone for a smoke. He’s gone out.’

We tell them, “It’s no smoking here, it’s not okay.” One youth has caught on that I smoke, because I tell them that I’m going to do a perimeter check, and there’s times he’s said to me, “Are you going for a smoke?” I go, “No, I’m going for a perimeter check; I’ve got to make sure you guys are safe.” The youth that do smoke, I don’t say anything ‘cause I don’t want to trigger them into wanting one. Because we’re not supposed to smoke, we try not to smoke in front of the young people.

For a lot of them, they used to smoke. Their whole family smoked. Their siblings all smoke. It’s kind of like me – everyone in my family smoked so it was just a matter of time before I started.

I’m very careful smoking. I always wash my face and my hands when I go back into work, and I’m always spraying my clothes so I’m not bringing the smell back in with me. I don’t want to smell. I don’t want anyone who’s a non-smoker to feel imposed on by me smoking. I want to respect everyone’s space so they respect my space. I don’t like being judged for it. I don’t judge anybody for not doing it.

I’ve got friends who don’t smoke and they’re quite happy to hang around me. I wouldn’t exclude them for not smoking. If I go to events and I’m the only smoker there, I feel if I go back inside, they’re gonna look at me and it’s a little bit embarrassing or I feel a bit self-conscious. It’s not gonna stop me smoking, but it doesn’t make me feel very good either. I like to hang with other smokers then I feel no judgment from that corner.