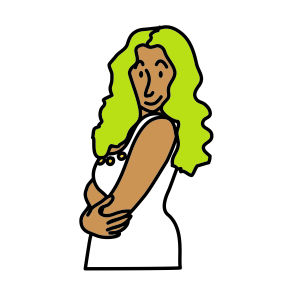 Hineawhi is a 47-year-old Māori woman. She lives in the lower North Island. Hineawhi is the mother of two teenagers.

I currently smoke about 20 rollies on a normal day. The only time I buy tailor-mades is when I’m thinking I’ll just have this packet and then I’m quitting.

I’ve tried to quit – oh, over a hundred times! I always want to quit. I’ve tried everything.

In the last 30 years, the longest I’ve stopped was probably about 7 months. The other times it would have been only a couple of weeks.

Sometimes it helps. I had one lady who was really good, but most of the people that I’ve had only work during work hours. So, if you’re at work too then they aren’t available when you are. They don’t do it at night or after work hours. So, it’s no good. The only other option is if you ring Quitline.

I think I have. My cousin had some. It seems a bit hard to access. I think it was about $10 cheaper, but the quality, ugh, there was thick bits in it – like a lot of clumpy bits.

I don’t mind vaping. I’ve tried it, but I couldn’t find the right one for me. I either break it by mistake, I don’t read the instructions, I don’t use it properly or I’m just not buying the right one. I’ve been to a vape store. Maybe they were just busy at the time – I’ve asked twice – it wasn’t helpful. I went to another good shop about 20 minutes away and I asked about the type of vapes and strength of liquid, but they didn’t know either.

I’ve tried about 3-5 different types of vapes – electric, one with a juice, one that’s a pen etc. They end up breaking or I end up wasting them.

It’s not good for the health of our children to smoke in the car. So yeah, banning smoking in cars, that’s okay.

Oh, I just think they’re making money off of our addiction, off of our health, or illness. The price affects me., I rarely go to a hairdresser or a dentist. I mostly shop at second-hand shops. But I still buy tobacco because I’m addicted and, even though I’ve tried stopping over a 100 times, I haven’t been able to kick the habit yet.

All these quit programmes and stop-smoking people and organisations – I haven’t found them helpful for myself. The reason I haven’t found them helpful is because their approach is very clinical. It’s like, “You need to patch, you need to do all these things, you need to …” whatever else, and do these strategies and then you can quit. But, like, where are our voices in that? When do we get to say the strategies that we think will help us quit? Nobody ever asks us what we need to quit. If you do say something to the quit-smoking people, they just say, “Oh no, you don’t do that – you have the option of these patches, or it’s just gum”. Well, I don’t want either of those. They don’t work for me. And then you fall outside of that.

They need to listen to us smokers. There are others, you know, we wanna be able to shape or create those solutions for ourselves. I look forward to doing that.

Initially I smoked more ‘cause of the anxiety around that whole COVID situation. My stop-smoking person dropped some patches into the mailbox, the lowest strength because that’s all she had, which meant I had to wear 3x 7mg matches at once. This doesn’t work for me and I told her that. Again, I wish stop-smoking organisations would listen to us and let us co-create our own strategies and solutions and support us to do that. So, I just bought tobacco from the supermarket.

The price has gone up. Including the papers and the filters, it’s just under $77 now. It was just under $72 before. That’s way too expensive for me because my income’s decreased a bit.

I’ve got to figure something out, a way of stopping or move into the vapes so that it’s a comfortable transition, because it’s just too expensive.

I went into the new big vape shop in town. The lady there was very helpful. So I bought a vape and she set it up for me, and I watched her and took photos. But I don’t know, maybe I just get the wrong ones. I’ve got to take it back - it leaks. And I think the strength of the nicotine that I bought is just way too strong, I just cough all the time. I went for 30mgs and menthol. Then I went back and got a 6mg in caramel.  There might’ve been some residue of the 30mg in there that might be causing me to cough. I’ll probably go for the 3mg next.

The first week I tried just vaping for 2 days. But I was just coughing and coughing.  When I went down to the 6mg, I was still coughing. I still have tobacco and it doesn’t do that – not to the extent that I cough every time. So, I went back to having rollies, tobacco. Then I’d try another vape. I’d cough again and be like oh no, so, I didn’t vape much.

So, I need to get around to taking it back.

I’ve tried the patches, the gum and those lozenges. The patches just gave me blisters. At work, if I know we’re going into back-to-back meetings, I use some gum and lozenges to try and get through those 8 hours. It takes the edge off. But I make up for it at night, by smoking a lot. If I run out of tobacco and payday’s a day or 2 away, then lozenges it is.

There is a recommended dose, but I can’t remember what that is. One lozenge will usually be okay for 2 to 3 hours and then I might need another. The ones that I have are only 2mg.  I figured it’s gotta be better than smoking. I’m not using it to quit. Mum also smokes, so I can borrow some from her and then pay her back on payday. While I’m relying on lozenges, I get headaches. I feel dehydrated and if I go longer than 3 days, I can’t sleep. I get cranky. I think that’s one of the reasons why I haven’t been able to stop. They say if you can just make it through 3 weeks – but it’s a bit difficult, when you really need to get some good sleep, to make it for 3 weeks.

I’d be keen if there were people that get together to discuss in a group session what is the best vape for them – their experiences, if they’ve had vape or other products. That’s how I got on to this vape. My cousin was vaping nutty caramel and I tried it and it was really sweet, it didn’t make me cough at all. That’s why I went to nutty caramel. But I think it was her machine. Her machine was like $250. I was nah, I can’t afford it, so I bought a $60 one. But yeah, the chance to meet with others, where people can say, oh I tried this or that machine, if you open the valve, the airway thing, you’ll get a smoother vape… that kind of a discussion would be helpful.