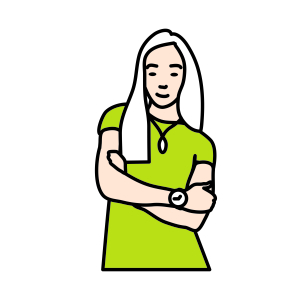 Alna is a 30-year-old South African woman who came to New Zealand in 2016. She lives in Auckland with her husband and 4 children, ranging from 22 months to almost 8 years old.

I started smoking when I was about 14 or 15 in high school in South Africa. Both my parents smoked as did my older brother. Our neighbour’s son was the same age as my brother and he also smoked. So, we kind of just started testing it out together. It was just sharing one or two a day between us.

Our neighbour’s son bought cigarettes, but my brother and I – at that stage we didn’t have any money, so we just grabbed some of my parents’ cigarettes and they didn’t notice. As we got older, we would buy from our pocket money.

I was about 17 or 18 when I started buying packets, which would last me like a week. The moment I finished school, it became more. I would smoke a packet in 2 days and then later on it became a packet a day.

When I arrived in New Zealand I had to cut down because it was so expensive. I had to really try and spread them out. I got down to a packet of 25 every 4 days.

I’m down to about 9 per day. I wake up, make a cup of coffee and sit outside and have a cigarette. After that I’ll come in and pack the lunch boxes, get the clothes ready, wake the kids up, get them dressed and then I’ll go have a cigarette while they brush their teeth. After that I smoke when I feel (this is going to sound terrible), if I feel overwhelmed – like, where do I start cleaning or whatever… okay, just let me just have a cigarette first. I'm like, oh just let me have a time out with a cigarette, and then I can come back to what I need to do.  So, that’s like my self-regulating moment.

Coffee, that’s a trigger for me 'cause I always have a cigarette with a coffee, and I drink a lot of coffee.

During and after lockdown I started smoking more. Now a packet only lasts about 2, maybe 3, days. I think it was ’cause it was a bit more stressful being at home constantly with all the children, and my husband was working from home. Everything was just a bit more of a mess. And you couldn’t really go out to go shopping and walk around and just get some fresh air.

I never really take my children to do all of those things because it’s a bit chaotic with four kids going to a shop. I think that contributed to smoking a bit more. I was trying to keep the kids quiet while my husband was on the phone or a video call.

I stopped with my 4 pregnancies completely. I think that was a matter of mind over matter, because it’s my baby, you know.

During one of those times, I phoned a helpline in New Zealand. They were all right. But, if I really had real trouble stopping and I wanted to quit I don’t think Quitline would have made a difference, to be honest. I mean they offered me a prescription for patches and this and that, which I obviously, didn’t take. I was never interested in taking anything. I wouldn’t ring them again ’cause I just have no intention of stopping.

I have only one doctor that I go to. They know I smoke, but it’s never been part of a discussion. I've never had issues with my chest or that kind of thing where they would say, “Oh, I can hear you’re a smoker”.

When I was about 19 or 20 years old, in South Africa, I tried an electric cigarette. “Electric cigarettes” is what they called them and they had, like, different flavours and things. But, it wasn’t my thing.

I haven’t tried vaping again. I don’t like the idea of vaping. To me, it’s chemicals that I feel are more dangerous than smoking dried leaves. Vaping is chemicals they put together to give you the desired effect. So, I don’t think that’s good for you at all.

Some people have replaced their smoking with vaping. To me, it’s not the same thing. To me, smoking is relaxing. I go to have a cigarette and it’s a nice time - I relax for that few minutes. A vape doesn’t do that. It’s like reading e-books instead of actually having a book in your hand.

The thing is - I don’t drink at all, like nothing. So, while other people relax with a glass of wine in the evening or whatever, I have a smoke to do that for me. It gives me time to think and plan while I'm having a cigarette.

Bans on where people can smoke …

I don’t smoke inside my house or car. I only smoke outside. I've never had the desire to sit inside and smoke. I enjoy sitting outside and being away from the hustle inside.

I definitely agree with the ban on smoking in cars when children are in there. That is also one of the reasons I don’t smoke in my car or inside my home, because my kids are in my home. Just because I enjoy a habit doesn’t mean I'm going to expose or influence the health of my family. That’s a decision that I make. So, I'm completely on board with not smoking in the vehicle because I feel that the child doesn’t have a decision there.

Thaaat is something that my husband often brings up because it’s so bloody expensive and it keeps going up. He wants me to stop smoking because it costs a lot of money. I can definitely see that if I had to take the amount of money in a month that I spend on smoking, I could buy clothing for my children, things like that – basic needs. I pay $36-something a packet every three days. It adds up very quickly – very, very quickly.

I don’t know why the cost is going up constantly because they're not putting up the price of any other habits like drinking and so forth. I feel that it’s kind of discriminatory against people that smoke. They're discriminating against people that smoke because they're not putting up prices of other people’s habits that are also not as healthy as they would want it to be.  Drinking causes way more health issues than smoking, I feel. So, to me, that’s discriminating against my right to be able to live and do the thing that I want to do.  And, I'm not influencing anyone else in my decision to smoke. So yeah, to me, that’s not right.

I've heard of Smokefree 2025 but I don’t know that much about it.

I don’t think we should be judging people on their habits. Obviously, people I know who come to my home, know that I smoke. They can take it or leave it, this is where I live. But if strangers come, let’s say for a kids’ birthday party, I do feel very judged. That’s why, to be honest, I don’t smoke when there’s a birthday party. I shouldn’t be doing that. I shouldn’t be putting up something for others not to judge me.

I do feel like in New Zealand, specifically, lots of people are very judgmental about, “Oh, don’t get the smoke here”, and “Oh, this is so bad”.  They wanna be very green, and, you know, not everything is green.

What they do with cannabis doesn’t bother me much, ’cause it’s not something I do. My husband, who doesn’t smoke at all, gave me some info on how much money it would save the government. All the cases of people being charged for possession of cannabis and that kind of thing, takes up the time of our legal forces and it costs. But smoking it? I don’t really have an opinion because it doesn’t affect me and I don’t come into contact with it.