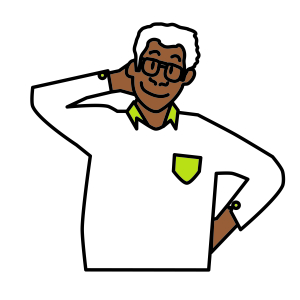 Eru is a 62-year-old Māori man living in the South Island. A head injury from a road accident 12 years ago ended his working life as a shearer. He is a father and grandfather.

I started smoking when I was about 11 or 12. Mum and dad smoked, all my uncles, all the neighbours smoked and some of my friends in the high school were experimenting and learning to smoke. So, I thought “I’ll give it a try, too”.

Everybody smoked back then

Well, tailor-mades were a different story if we were in a pub or somewhere, or on a mission doing something, but it wasn’t what we’d smoke at work in forestry or on the farm or shearing or anything. Other people did, but it was tobacco.

I can remember very clearly the old miners down the pubs, and they’d be talking with a rollie still in their mouth. It would have gone out, but they’d be talking away and they’d pull it out when they had a beer, put it back in even if it was out and carry on talking. Then, they’d give it a wipe if it was someone else’s time to have a yarn, and light it up. It was hard case.

I don’t really count how many I have. If I’m busy, I’m quite happy just to leave it alone. It’s when I’m doing nothing, or when I’m thinking about something, then I’ll have a cigarette. I smoke rolls. I’ve just bought a 30 gram. It’ll last me for 7 days ’till my next Support Living thing goes in the bank. I’ve got to make it last for 7 days. When I was shearing, I could smoke a 50 gram in 3 or 4 days, not a problem. But that was 12-plus years ago. It was big money, shearing. I’m not in that situation anymore so I really want to stop, but it’s not gonna happen.

I’m not smoking as much compared to what I smoked 10 years ago. Still, if I wake up in the night to go for a piss, I’ll have a few puffs of my bloody butt beside the bed before I go back to sleep. Tobacco’s not as good as what it used to be.

I’ve only stopped smoking when I got crook a few times. It was on my mind to quit, for my health and, of course, because of my financial situation over the last 10 years.

The last 4 or 5 years, since what’s-her-bloody-handle put the price of tobacco up to try and get everybody to stop smoking, it’s become a financial struggle for everybody. But it’s just a hard habit to kick. I slowed down. But I could not stop.

My doctor put me on mint-flavoured chewing gum plus the patches. I’ve been on this for a couple of years off and on. The patches knock me around a bit –gives me headaches. I’d be feeling like, shit, I’m on a trip here or something close to it. My tummy used to get upset too, but not bad. I could handle that.  It was just the bloody headaches. At first, I thought it was because of my head injury. But, no, I’m sure it wasn’t.

I was quite keen not to have a bloody cigarette. It did put me off the thought of having one. But in the end, I’d just have a cigarette to get rid of the headache. I think it affects different people different ways.

I’ve got a new doctor. He’s more or less saying what my other doctor was saying. He said, “There’s a programme here if you’re interested.” I just shortcut it by saying, “I’ve tried it, I’ve slowed down, and I’ll get in touch with you if I am interested”. He didn’t ask me anymore.

I tried homegrown once or twice, just friends gave me a puff of it or a handful now and again just for me to experiment with it. As far as I’m concerned, a cigarette’s a cigarette.

I haven’t tried black market tobacco. I’d like to, of course everybody would like to. I do know that some moves around, it’s on the market. But I know more about getting the other stuff than what I do about getting tobacco illegally. Marijuana is easier to get.

My neighbours do it. The old girls do it, the old fellas won’t. Some are quite happy with it. I don’t wanna get into that. I can’t see myself getting any satisfaction out of it. I could be wrong, of course, unless I try it.

I think it’s got to be better for you. It would have to be, otherwise it wouldn’t be here now. But, I don’t know the chemical situation of it.

I’m living in a council flat in a block of 1-person flats. I’m the youngest one here. I smoke inside and yes, I’m breaking the rules. Everybody here smokes and breaks the rules.

The law banning smoking in the car while you’ve got children in there is a bit odd. Smoking in your kitchen, smoking in your own house with children, that’s a big no-no for all my children and my grandchildren. Everybody goes outside. And, that was happening way before the ban on smoking in the car when you’ve got the children inside. The parents would’ve worked it out at home, in the kitchen or in the house with the children there. They’re not going to then go, “Oh, let’s go for a drive and roll up a cigarette” when the car is smaller than your house and your kitchen. Common-sense from parents should’ve kicked in pretty quickly without them having to be told.

It goes up $2 or $3 dollars every 6 months, I thought. I don’t see what the government’s getting out of it. They’ve been getting too much out of it from day 1.

I heard a bit about that when the price of tobacco went up from what’s-her-bloody-handle. I thought, I don’t wanna listen anymore about it. Although I can understand it’s a good idea, it would be very hard for me.

Let’s not forget 100 years ago we watched black and white movies and Clark Gable and whoever, and these heroes had cigarettes in their mouth. It was just the way life was then. A few of the old people, they’re older than me, they still accept it as such. They’re not gonna change their ways in a hurry.

Some of the old ones over 70 or 75, they’re still having a cigarette – just 2 or 3 a day. They’ve probably got about 10 or 15 years left some of them, or even less than that, but they’re quite happy having a smoke and yeah... if the police come along and say ‘you’re not smoking anymore’, they’d be quite happy to just roll over and cark it.

I voted no because I don’t know what’d happen if cannabis was legalised. I wasn’t in a situation where I could understand.

We’ve all slowed down our smoking compared to 20-30 bloody years ago. We’re all in our 60’s now. Some of them have stopped smoking. It’s not only a financial situation, but also a health situation. They're coughing too much, so they’ve slowed right down, or stopped.

I’ve been on rollies for a while. But our financial situation gets to where instead of spending $60 on a packet of 30-gram tobacco, I would rather spend $28 on a packet of 20. I break them down and it will last a long time and slow my smoking down.  Out of a 20-pack I can get about 45. I try to roll them as thin as I can to get about 8 nice puffs. A 30-gram packet would last me 7 days. I probably smoke about 8 or 9 of them a day. I just want a puff, then put it out and fuck off and do something else. But then it’s there – and I only light it up and have a puff because it’s there. I will make them last as long as I can and can stretch it out for 7 days.

If I get up during the night to go for a piss it could be 2 or 3 o’clock in the morning, and before I go back to sleep I’ll light my butt up, have a few puffs and go to sleep. Then I’d probably wake up another couple of hours later, have another piss and have another puff. I wouldn’t smoke a whole cigarette. It doesn’t make sense to smoke a whole cigarette. I’ve got it beside my bed. It’s just habit. So, I’m breaking the rental rules, smoking inside. But yeah, there’s thousands of us do it.

I haven’t heard anything. I try and avoid listening to the stop-smoking stuff.

I’ll give it a try if it is half the price for a 30-gram.  I’d have to try and have a puff of it first before I could say anything about it. It’s just something that I don’t know about.

I used to smoke ‘buds’. I used to grow my own. Now, I’m quite happy just having a toke of bloody cabbage, that’s enough for my fucking head. I still like a cigarette after smoking a lot of cabbage.

If the price is quite low, I’d give it a damn good try. But, will I still get satisfaction?  If not, the body is not going to accept it. It won’t work with me, I’m afraid. I want a cigarette, end of story – a real cigarette. I’ve slowed down, but I can’t change. I’m trying little bits of this and that, even home-grown tobacco and that’s alright. I’m rolling big fat, fucking joints.

If there’s no satisfaction –what it boils down to is I might as well stand on a chimney on somebody’s house and smell their fucking coal fire or wood fire. I’ll ignore it for a start off and that’s as far as I’d go. I just wouldn’t be interested in it. I’d try and find home-grown tobacco.

Hopefully, it may not happen. Maybe I may be able to stop, but it’s not something that’s going to happen tomorrow. I love the fact that I could, but what it boils down to is my way of thinking, just who I am, can I do it? I’m just damn happy, and all my doctors for years have been happy, that I’ve slowed down.

It’s on my mind to give up. It has been for quite a while now. I’ve got to stop because some of my grandchildren are very young. So, I smoke outside.  They know Granddad smokes, Nannie smokes, Uncle smokes. We don’t do it in front of them, but they can see us outside so straight away they’re thinking, oh I’ll try that one day.  So, I walk further away from the window so they don’t see me having a smoke.  They can’t see me, but they can still see a puff of smoke. So, I’ve got to think like that. That’s why I really want to stop, so there’s no smoke at all unless I’m smoking bloody fish heads or something. I don’t want it to get into their mind that if it’s good enough for Grandad – good enough for Koro ­– then when I grow up, I’ll do what Koro does. But, I find it very hard to change things at my age and I’m only in my 60's. I’d find it very, very hard. Because I have a mental attitude, if I haven’t got a cigarette, I’m going to be pretty grumpy.