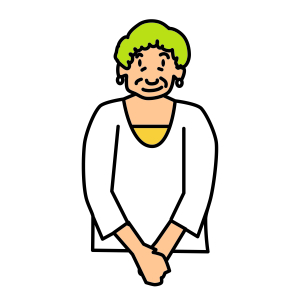 Margaret is a 73-year-old woman who came to New Zealand at 16-years-old. She worked as a nurse for 25 years before retiring at 65. She lives on her own, but her daughter and grandchildren live close by.

Everybody smoked. Mum and Dad were smoking, my grandfather was smoking, and I was allowed to smoke. Both my parents encouraged it. It was quite normal.

At the moment, I've got a back problem and I can sit down, relax and have a cigarette and the pain is not so bad.  If it’s a nice day and I can work in the garden, I would smoke less than 10. But if it’s rainy and if I’ve got stiff, or there’s an argument with the grandchildren or I sit down with a glass of wine, which doesn’t happen very often, I could easily go to 15.

I enjoy every cigarette. It’s just getting so bloody expensive – that’s the trouble. I buy the cheapest, but I go once a week to buy my groceries and I’m buying 5 packets of cigarettes!

I have tried to quit about 3 times with no success at all. I would have been about 30 years old, then when I was 40 and 50. I really wanted to give it up, but nothing works. I’ve tried everything. You name it, I tried it. I tried the patches. I tried the chewing gum. I tried the oil. I joined up with different clinics. I joined up with a hospital study and had to put new stuff in my mouth and it made me sick.

About 30 years ago I tried hypnosis. After an hour of hypnosis, the minute I was on the street I had a cigarette. I had about 3 or 4 sessions and then I told the man it didn’t work. He gave me back my money because it was quite expensive. I think it didn’t work because I enjoy every cigarette.

Three weeks is my record. But I think it would have been the worst 3 weeks of my life. I was a nervous wreck, and I felt like killing somebody! It was really bad. I only lasted that long because I sort of brainwashed myself. I was so determined to give it up, but really it was hard work. I’ll never go through that again. That’s why I don’t want to give it up today because it was really hard work and I got such a bad temper – I was really a nasty person – that’s just not worth it.

If I could wave a magic wand and never have a cigarette again, that’d be fine as long as there are no side effects and I stay a nice happy, pleasant person. Perhaps if some miracle comes on the market tomorrow… but there's nothing at the moment that would work for me.

I haven’t tried vaping because they say it helps you a wee bit, but other people in the paper say it’s no good for you either. Then there’s always one person that dies after vaping or something. So, you never know what’s safe.

Ten times out of ten, having a cigarette is just a habit, isn’t it. I mean, when I sit down and have coffee, I have to have a cigarette. If I had something else to put in my mouth, I think I would be quite happy. I have thought, oh I must try it one of these days. I should try it.

Also, I don’t know how to do it. You’ve got to get a machine. You’ve got to put oil in it or something and I think, oh God! It sounds so complicated.

I had an X-ray and my lungs are okay, but everything else is packing up. So, you know, you can't win. I've got diabetes as well. I have to go every 3 months for my diabetes, and my blood pressure and high cholesterol, and now I've got arthritis in the spine. The only way to relax, is to sit down in my La-Z-Boy and have a cigarette and then I've got no pain. It’s a vicious circle. But, for now, my lungs are okay.

You’ve got to realise, at 73, one day you’re going to die. Of course, I’d like to be here a little bit longer to see the granddaughter getting married. But it’s a fact of life, you're going to die. I know it sounds silly, but I'm happy with the way things are.

Smoking in the house, car…

It’s my house and I smoke in it. I don’t smoke in anybody else’s house. And I don’t smoke when I've got visitors. Actually, all my friends have given up.

If I have a long trip by myself, I’ll have a cigarette in the car. It’s my car, I'm by myself. It’s my life and that’s it.

I've seen others smoking with three toddlers in the back seat of the car – I don’t think that’s fair. I never smoked in the car when the children were little.

Oh my God! That’s gonna be a hassle, isn’t it? I'm really worried about it. I think a year beforehand I’ll buy lots and lots and lots of cigarettes and stock up enough for a few years.

Smoking doesn’t worry me. I've never been to the hospital because of my smoking. Why should I have to give it up if it’s not in my DNA that I’m going to die early from smoking? And, if I do end up in the hospital, I have paid soooo much tax on my cigarettes that, you know, I wouldn’t feel guilty. Really. There's nothing wrong with me yet, and I enjoy it – why take it away when I'm 75? No! I will stock up. I will go to every shop in town and buy a carton of cigarettes.

Also, it’s going to be really bad for the tourists. The Japanese are big smokers. They won't come to New Zealand if it’s smoke-free.

I didn’t mind lockdown. I just wanted everybody to be safe, you know. And I’m by myself. I love being at home. I love my own company. I’ve always got plenty to do. I’m very happy at home. I was lucky – I’ve got a big garden – so I can walk outside and do a bit of gardening. For 4 weeks, every day we had beautiful weather. I met some of the neighbours on the street, with distance. So, it didn’t worry me at all.

The only thing I missed so much was the grandchildren. Now with Skype, you could see them on the computer. But one of them had a 16th birthday and that was so sad, ’cause 16 is a very big important date. But, I’m so lucky, because some grandmothers didn’t get to see their grandchildren at all because they don’t have computers.

But I did stock up on cigarettes. I bought a carton of cigarettes and that kept me going okay. Towards the end of the 4 weeks, I did run to the dairy to get some more cigarettes. I usually go to a supermarket. But I wasn’t going to the supermarkets.

I was in such a turmoil about the referendum. I wasn’t going to vote for smoking cannabis because I was thinking of the grandchildren. I wanted to say no for them. But, if they ban tobacco, then I will probably need to smoke weed for my pain relief – not tomorrow, but later on. So, I think I did vote yes.