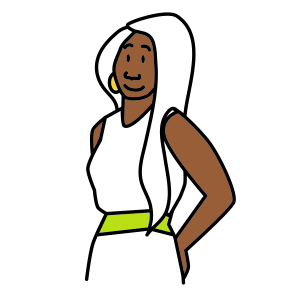 Mahalia is a 30-year-old Māori/Tongan woman who lives in a coastal town in the North Island. She works in the retail industry and is a caregiver. Mahalia is married and has 4 children.

I started smoking at the age of 14. I didn’t smoke every day, it was just socially.

My parents weren’t really happy about it but my mother ended up letting me smoke under conditions – I could only have 4 cigarettes a day and I wasn’t allowed to smoke in front of my grandparents. It wasn’t until I was maybe 18 that I was smoking 10 to 12 cigarettes a day, tailormade and rolls. That was it until I was 26.

Every year, when I smoked, I tried to quit. I tried Quitline, nicotine patches, the gum and Champix. Quitline was really helpful, I just didn’t have that much time. I don’t think the patches helped. I felt like every time I had them on, it made me want to smoke more. I had cravings, but I was also just drinking more. I had really bad side effects with the Champix, though I don’t know if it was the Champix. I think it was just the quitting – you have mood swings. I was always tired and had nightmares, although I just thought that was just from not getting enough sleep.

I even quit cold turkey. I think that was when I was 28. That was the longest I stayed quit – for 2 years. I quit for 4 years once after I was really sick. So, in the whole 4 years, 2 years of it was cold turkey. I didn’t ring Quitline then. I just quit everything and decided to not smoke.

I didn’t enjoy smoking cigarettes at all. I started back up again because I went back to fulltime work – now, for me, it’s enjoyable.

We just smoke rollies now because that’s all we can afford. I smoke about 10 a day. So, there will be a point when I want to quit again, because it’s expensive. But maybe I need to figure out a different thing to do. My husband has tried heaps of times too. He’s actually quit longer than I have.

I tried vaping but then I heard all these horror stories. I liked vaping. I could just have a puff here and there when I wanted to. I didn’t necessarily have to go outside, and it doesn’t stink, and it doesn’t give you bad breath, and it’s way cheaper. But now, it’s like, ‘Oh, I don’t want it to blow up in my pocket’. I was lying next to my friend when she was charging her one, ’cause we had the same vaping machine. This was about 3 or 4 years ago, and hers went really hot and she burnt her two fingers. I think that machine got recalled due to a manufacturing error or something. We took that back and they said you can only leave it on charge for so long, but that’s another thing too – the battery wouldn’t last long. And then you’re having to spend more money. That was one recommended by a health organisation that was trying to get us to quit.

I enjoyed lockdown actually, to be honest. I liked it. I still had to work through lockdown, so nothing really changed for me. I’m a caregiver for my mother-in-law and I also work in retail. I did actually smoke less during lockdown because I had a timeframe to get to places and to do things.

I don’t think it’s working at all. Like, I’ve been around a few people that grow their own. The taxes have made more people want to grow it.

Me and my husband smoke, but there’s no smoking in the house. We have a designated smoking area outside. No smoking in the cars either. But, we’ve always been like that.

I like it, but I don’t think it’s going to work.

I didn’t like the referendum because it wasn’t thought through properly. I thought that they just rushed the process. So, I’m kind of glad it didn’t go through, but I do, in the future, want cannabis to be legal. It’s not ’cause I do it. I don’t personally use it. I just think it would lessen the stress on people who use cannabis for medicinal use.

I still smoke, it’s gone up. I think it’s increased. I smoke 12-14 cigarettes a day now. As soon as I open my eyes, I want a cigarette. That’s the first thing I do, is have a cigarette. I don’t even wash my face.

I’ve just had so much on. We’ve been full on with work and life. It’s stress. And I really want to lose weight as well ‘cause I’ve packed on weight I can’t get rid of. I’m just being lazy probably. So, if I’m hungry, I’ll have a cigarette which you’re not supposed to, but it’s the easiest thing to curb my appetite.

I’ve heard of places where you can buy cheaper cigarettes but they’re out of town. I’d just spend the extra $2 or $3 on gas, trying to get there. So, there’s no point.

We don’t vape, but I think it’s a good thing. I still think it’s a bad habit. Like, it’s an alternative to smoking cigarettes but it’s still not a solution. But now there are lots of devices, and they’re certified and there’s more information on it.

My sister has just started vaping and she’s a chronic smoker. She can’t go without a cigarette. So, to see her trying it I think maybe it will work.  She’s fully vaping now, but she did that because she had a big health scare not too long ago. So, it’s either vape or…

I think they’re good. They make me think that I need to quit. More so, it’s the cost. I think they’ve gone up a dollar more. If the cost wasn’t an issue, I wouldn’t think about quitting at all. Like, the health factors are still there. I still think like, oh no, but that’s along with other things too.

Every time I visit the GP, even the nurse - she’ll ring every 3 months to say, ‘Hey, do you know we offer this and that?’ I think it’s on their database that I smoke. So, she calls and always offers support and I just tell her I’ve thought about it. I’m just not ready yet. If I have a really bad health scare or I can’t afford them, I’d probably quit. That’s the only two things.

Banning smoking in cars with people under 18

We have two vehicles, and my partner and I don’t smoke in either of them. Even when the children aren’t even in the car, we still don’t smoke.

I’ve grown up with asthmatics. I’m lucky my children aren’t asthmatics. My nan was and even when you weren’t smoking in the car, she could smell it and it would give her an asthma attack. That’s why we learnt not to smoke in the cars or in the house. So, it’s been a habit from early on and now we stay like that.