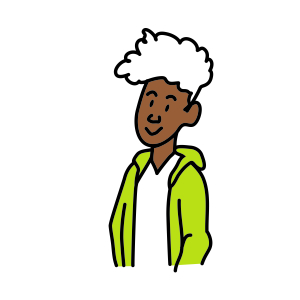 Nikora is a 20-year-old Māori man living in Auckland. His partner has a 2-year-old child. Nikora currently lives with his mother and has a fulltime job, often finishing late.

I started smoking when I was 15. It was just school being stressful – not passing classes, teachers always putting me down, little bits and bobs like that. Smoking was a stress relief. If you can’t go to the doctors and get a prescription for something to calm you down and reduce the physical symptoms of stress you just need something to chill you out.

I’m not heavily smoking like I used to, I’ve slowed down. I used to have 1 in the mornings. Now, I have my first cigarette around 10 o’clock whenever I happen to have my smoko at work. It all changes. Then I have 1 throughout the day and then when I get back home, I normally just have 1 with Mum and talk to her for a bit. When I drink I’ll smoke maybe a whole pack, but that’s just drinking.

My smoking probably increased during lockdown just from boredom. Maybe like every 4 days I would’ve smoked a pack ’cause you’re stuck at home or I’d be just sitting outside here, nothing to do. And even when doing stuff, you just smoke while you do it.

Half the time you just start getting tired of it and you slow down. Me and my mates probably have about 6 a week. For a big while we smoked, like, 2 packs a week, but eventually you start slowing down on them and you just take them when you need them.

I tried quitting but it didn’t work out that well. Eventually, you just end up back smoking. People stress you out or you get bills come in and just… it’s quite a nice sensation just being able to relax. I’ve tried the pads, I’ve tried those chewing gums, they all just don’t work.  They’re literally just useless products from my point of view. Mum had both of them sitting in her wardrobe. She said, ‘Take these if you wanna quit’. She found they didn’t work for her either.

It’s just a self-thing, if you wanna quit, you quit. I can quit when I feel like it. I’m just waiting until I sort out stuff at home, when everything’s a bit more chilled.

One time when I tried quitting cigarettes, I tried vaping. I started doing it before everyone started vaping and doing the nicotine salts. It used to be like everyone used to get shamed for vaping.

I’d rather just do the cigarettes because vaping tastes disgusting anyway.  They give you flavours, but it’s just not as strong. I don’t know. Some people like it. But just hanging around people, I learnt that vaping’s a lot worse than cigarettes ’cause once you get addicted, it’s so easy just to puff on it and people do it inside ’cause there’s no smell. Apparently, vaping is just as bad for you.

My girlfriend does it. I’m probably the reason why she got into vaping because I was vaping. She didn’t even smoke cigarettes. Now she’s addicted to the vape because they’ve gone and put 3 milligrams nicotine in literally every vape liquid there is. I don’t mind. If she’s happy doing it, she’s happy doing it. I’m not gonna judge her. She doesn’t judge me, I don’t judge her. It’s her choice. If she wanted to quit, she quits.

Tried home-grown or other tobacco products?

I’ve been wanting to try home-grown. Actually, I tried it once. A mate had some. It wasn’t too bad. I can’t explain how it tasted, it was a while ago.

I don’t like chewing tobacco, it’s just way too strong and it doesn’t give you the hit. Some people say it works. I think it’s just disgusting.

I remember there was one that you put by your lip. I tried that once or twice.

I live at Mum’s house. Just her and I smoke. No-one really likes smoking in the house 'cause it just leaves a nasty smell. I think for everyone it’s just common-sense to go outside to smoke. No-one’s really talked about it. Everyone just knows to go outside.

I haven’t heard anything about a new law. I know the one about the motorway where you’re not allowed to throw cigarettes out on the motorway. Oh, the law banning smoking in cars when children are there – that’s like common-sense though, ha-ha. I’ve never done that before. I used to smoke in my car when I was younger, but I don’t like the smell of it afterwards. I’d just rather not smoke in my car. I like having it smelling nice and looking clean.

I actually haven’t seen a quit-smoking ad in probably a year now. They just disappeared. I did hear about Smokefree 2025 and I was like, it just means they’re gonna raise and raise the price. All they’re doing is just getting money from putting the tax up on cigarettes. They’re just raking in money. I don’t think they actually want people to quit. I think they just want all the money in.

I used to just to stick with 1 brand. Now it’s definitely down to what’s the cheapest and they taste like absolute rubbish, toxic, like a rubbery kind of taste. I feel like it could make you physically ill – that’s how bad some of the lower priced ones get. I’d like to know if there’s any cheaper places to buy cigarettes but I’ve never taken the time to find out. Prices keep changing and everything, it’s just real hard to keep up with.

It’s the cost of smoking that’s killing you now. It was like $21.50 when I was a kid. Now it costs like $36 for pack! I was like, are you serious? It’s ridiculous! And I’m sitting here, like, that’s almost 50 bucks down the drain. It doesn’t even need to be that high. They’re just choosing to do that. Alcohol affects you the same way, like, it’s gonna kill you. You don’t need to change the price. You’re not gonna change people who are already addicted to cigarettes, they’re just gonna keep buying it no matter what the price is. If people wanna quit, they’ll quit.

It’s got to the point where you might as well just go buy some drugs or something and smoke that instead, ’cause it’s probably cheaper. But, surely that’s not the point, and I don’t know why they keep raising it. It’s Labour, isn’t it? Ha ha. Labour’s stuffing us over. We’ll just kick them out of parliament to deal with them.

My girlfriend was for legalising cannabis. I used to smoke it but I stopped. It doesn’t agree with me. Some people can function fine on it, I just wanna go to bed.  Every young person’s gonna do it without the law knowing.  So, you might as well let them do it where people can actually see them and make sure they’re safe. I didn’t vote this year. I couldn’t be bothered with it. I had other stuff to deal with.

I've actually stopped smoking entirely. I haven’t even had one when I drink. I just don’t touch it anymore. It’s been probably over a month. I still get the cravings, sometimes. It’s just fighting it, really – that’s the biggest thing. I don’t feel the need to buy smokes. I feel like one now, but I'm not gonna have one ‘cos I’d need to go buy some.

I wasn’t intending to quit, it just happened. I got too much of a workload and ended up not getting time for it. Being distracted just started weaning me off it.

I’m actually feeling a bit better, to be honest. I feel healthier. I’m definitely eating a bit more, but I've gone to a personal trainer and I'm trying to cut 10kgs off, right now. I've been trying to give it everything.

I don’t think those cigarette things, like those brands, work for quitting. I reckon it’s down to your own self-control. I didn’t use any quit stuff. I think the only thing I've really had in that time was, like, 2 puffs of my mate’s vape.

I’ve heard of low-tar cigarettes but not low nicotine cigarettes.

If you think of how many brands there are out there, it’s a bit hard to get rid of them all and just replace them. It’s gonna be like weed, people will start growing it in their back yards to make a cigarette. Or people will start stocking up on them.

It’ll make people a bit angry ’cause they need it to calm down a lot. It should be a choice thing, ’cause it’s not fair on people that actually want it and need it. If you don’t have things like nicotine or weed, you're gonna create people who are more suicidal ‘cause they aren’t gonna cope.

It’ll be interesting to see if they can actually get away with it. If it was put to a vote, people are gonna go, “No”.

My girlfriend hated me buying the packs with the dead baby on them. She made me go back into the gas station and change it, to get a better picture. I felt the same way. If you lost a baby, or someone had a miscarriage, and they saw a dead baby, they’re gonna be emotionally affected by that picture. It’s really wrong. You don’t put a baby that looks really, like, messed up and diseased, on something. It doesn’t affect the smoking. I just think that’s disgusting that someone would put that there.