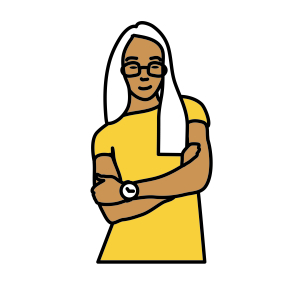 Tui is a 27-year-old woman who is both Māori and Pakehā. She lives in Auckland and has three children. Tui is a stay-at-home Mum.

I started smoking probably like 10 years ago, when I was 16. It was just a social thing really, at the beginning – out on the field or outside the gates before school.

I used to live with my parents, and they smoked. Now, I rent by myself with just my kids.

Smoking is not really a social thing anymore. It’s a stress relief. It’s a ‘me time’ – time for me to go outside for 5 minutes, have a coffee, wind down, then go back inside and tend to the kids again. It’s like a break by myself. I get out of the house, go sit outside by myself and just have a breather. Like, during lockdown, I probably smoked more ’cause I had the kids at home.

I have quit once during my first pregnancy – I quit cold turkey – but with my two others, I didn’t stop.

I don’t want to give up. I have no interest in giving up. I enjoy it. I feel like it’s my treat.  Like, you know, I buy the kids’ food, clothes, everything, and then the smokes – they’re for me. I think I deserve something for myself and that’s my smokes.

I got given some home-grown, but I was too wary ’cause I didn’t know what was in it or where it came from. It looked very dry. It looked like it would be really hard.

I smoke less than 20 a day. It depends. I’m on a solo-parent benefit, so yeah, it’s expensive, but I still buy them.

I’m currently seeing a budget adviser. She’s trying to get me to quit. She reckons it’s like if I quit, I’d save that extra each week. But my smoking’s the only thing I get to myself, really. That’s how I feel. Everything else is focused on my kids. I make sure the kids have everything, food and everything, before I get my smokes. It doesn’t really matter. If I were to save the money, it’d just end up going on extra stuff that we don’t really need. If you have more money, you find ways to spend it.

It sort of makes me feel belittled or frowned upon, like she’s saying, “you smoke but if you didn’t you could save that money” sort-of-thing. Like, what I feel she’s saying is, I’m silly, I’m wasting money on cigs. But the smokes are my treat. I need to stand outside for like 5 minutes in peace and have a cigarette.

Being a mum, you know, you dedicate your life to your kids. But there’s some point where $50 a week for yourself for cigarettes is fine, especially when your kids have everything already. Some other mums go out and have pedicures and haircuts, I go outside for a smoke.

I know they’re trying to make it happen, but I don’t reckon it will. It’s crap really, ’cause they made smoking legal so why are they trying to take it away now? If anything, they should put alcohol prices up. Smoking doesn’t affect anyone besides the person inhaling it or someone sitting around them, you know.

I always smoke outside, and I don’t smoke in the car. I think that law about banning smoking in cars with children is okay.

Smoking is just really frowned upon now. I remember when I was younger and smoking was all right in restaurants and everything. I remember being little and there was an ashtray on the table while we were at Denny’s. But I understand, though. I wouldn’t like to sit in a restaurant while people are smoking – that’s not nice – and I’m a smoker myself. It’d be very suffocating.

But, even if you just stand outside and have a smoke, people will look at you like, oh, it’s blowing my way.  I’m like, uh, but I’m outside. Or smoking while pregnant – you get really frowned upon. And because I look young, I got so many looks. It was real bad. But yeah, I’d just stare at them back.

I’m not a cannabis smoker myself but I do know people that smoke and it benefits them. So, I was voting yes for others, not myself.