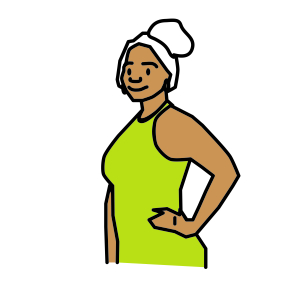 Talia is a 38-year-old Samoan woman who lives in Auckland. She is married and has 5 children. Talia is a stay-at-home mother. In her spare time, she makes candles.

I started smoking at 13. My older siblings always had smokes on them – and my friends. I smoked with my friends mainly. Probably at 15 I started smoking regularly, maybe 5 to 10 a day. I was just being a rebel. I got pregnant at 15. I’ve had 4 more kids since then.

My Dad has no idea that I smoke and I’m 38. My Mum just found out 6 or 7 years ago. My parents are very anti-smokers. I’m the only one from my siblings that still smokes. Oh, my older sister, she just started up again.

I smoke probably like 15 minutes after I wake up, and smoke maybe 8 a day – roll-your-own tobacco. And socially. My partner smokes and when I go to my in-laws, they all smoke. Whereas most of our friends don’t.

When I got pregnant at 15, I stopped smoking, but then I started up again, I think when he was 1. I smoked through the next 3 pregnancies and only stopped for my last. That was about a year and a half ago. The longest I’ve lasted was 19 months.

I’ve never thought about using the nicotine patches or gum, but I’ve been asked if I wanted to try it. I’ve heard of Quitline but it’s never crossed my mind to call them. I actually knew someone that was part of the quit-smoking campaign and she was a heavy smoker! I thought that was hypocritical.

I have one. My children bought it for my birthday last month. I love it. I like the mango and the gold tobacco flavours. I have two sisters-in-law who are currently vapers that have come off smoking.

The house is smoke-free and there’s no smoking in the car. I’m glad they passed the law banning smoking in cars when kids are in there. I’ve been wanting that for a long time. I saw it quite often in my area. We don’t smoke around the kids. Sorry, that’s a lie, the older 2 smoke. One’s left home. He’s a dad.

I have smoked in public, but I try not to. I think it’s rude to smoke around non-smokers.

The price of tobacco – it’s disgusting. I’ve definitely been thinking about it. I feel like I’ve cut down from, like, the amount I used to smoke.

I voted yes. I don’t smoke, but my husband has tried it a few times. I know many cannabis smokers. I don’t have a problem with them smoking it. I’m not Government. I feel like cannabis is not the problem with society, it’s more alcohol.

2 months later and switched to vaping…

I'm fully on vape now. We were always, like, we would never turn to vaping because we didn’t think it would be as satisfying. But, last time, we were talking about how New Zealand’s trying to go Smokefree by 2025. I thought it would be easier to transition – to try and quit now, rather than waiting for the law to change.

Yeah, so I started and then my oldest son, he’s 22 and he has asthma – so I don’t even know why he started smoking anyway – he switched fully on to a strawberry ice vape. I think he just didn’t like smoking by himself, I don’t know. But he doesn’t live with us. Then my husband started, but he still smokes cigarettes as well. And then the 20-year-old, he sort of vapes but he was more of a social smoker, like, just when he was out. The older two work together so it’s easier for them as well.

I started with the Ultra, that’s the one that we’re all on. I like mango, but the peach ice 4% has just grown on me. It literally feels like a smoke anyway. The only time I feel the difference is when I want a strong nicotine hit when I’m drinking. So, I still smoke when I drink, but I don’t buy smokes. I haven’t bought a packet of smokes for about 2 months. If a friend of mine is smoking and she gives me one, I’ll still smoke it. I still find it tastes better than a vape.

My husband also has a smoke now and then. He hasn’t actually bought any. At his work a lot of the workers smoke, and if he’s not vaping then he’ll end up smoking.

In the beginning it was a bit weird because so many other people are heavy smokers, but I think vaping is now just normal. One of my best friends who was a smoker, she’s gone the same way. Vaping is definitely increasing in the Samoan community.

I find it cheaper. It’s about $20 for 2 pods and that lasts a week. Before I was on tailors and rolls as well. Tobacco was costing us $70-something a week. We’ve definitely noticed being able to do more.

Reflecting back on starting smoking…

When I started smoking, it was partly our childhood. Our parents worked a lot so we rarely saw them. It was much easier to get away and sneak a smoke ’cause they were always at work.  They’re still like that now. So, we had a lot of spare time to get up to mischief. My brother’s been smoke-free for, I think, 10 years now.

My parents are really happy that I’m vaping ’cause I was probably the biggest smoker out of my siblings so. My sister was a smoker, but not a heavy smoker. My sister-in-law was a heavy smoker. She passed away from cancer in January and she smoked to her last breath.

I think I saw an ad on Facebook that was about switching to vaping. I don’t know whose ad it was.

When I used to take the kids to the doctors, they always asked, “Are there any smokers in the house?” I’d be like, “Yeah, but we don’t smoke in the house, we smoke away from the kids.” They would question, “Have you thought about quitting?” Then they’d offer different services. I think my husband got given a form at the hospital on how to contact them to get patches. At the time we weren’t interested. We weren’t thinking about it seriously.

I know someone who sells the Tongan tobacco. He has a massive plantation at the back of his house. I was thinking it wouldn’t have as many chemicals as the tobacco the companies add stuff to. I’ve tried it, but it’s so harsh. If I was desperate, I probably would smoke it.

Smokefree 2025 sounds like an amazing idea. That would be amazing if it was a smoke-free country.

What if the government banned filters?

If there were no filters when we were smoking, we would probably just have used cardboard, ha ha, some kind of substitute. We have done that before with the Zigzag card.

What if dairies and petrol stations could no longer sell cigarettes?

If someone’s going to smoke, they’re gonna find a way to get it.

What if the Government banned sales of tobacco to anyone born after 2004?

That sounds great. My daughter just turned 17 this year and I’ve got a 15-year-old as well and neither of them smoke.

I remember when we had just turned 16 and the age went up to 18. We’d just stand up at the dairy waiting for someone to buy our smokes for us. That would be weird, though, if people who were 25 or 30 had to do that, ha ha, or if a dairy person had to see everyone’s ID.

I don’t really know the health dangers of marijuana. I would assume it’s not as dangerous as heavy cigarette smoking. That’s only ’cause I know a few people that smoke cannabis, and they seem normal to me. Some of them don’t smoke cigarettes.