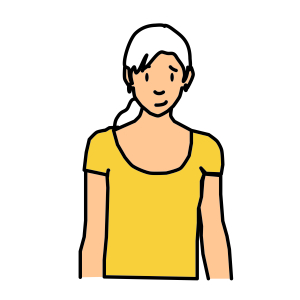 Amber is a 29 year-old Pākehā woman who lives in the lower North Island. She is a full-time mother caring for 4 children – 2 of whom have autism.

I was put off smoking a lot when I was younger because my family always smoked around me when I was a kid. I was very anti the idea of any of it. I didn’t like how they were acting with it, and I had asthma. It wasn’t until I was an adult and everyone I knew was smoking and I was like, oh well it can’t be that bad. I gave it a go and ended up liking it, and then got addicted.

I really like the relaxation of the first morning’s cigarette and the mindset that it puts me into - to be able to start my day off in a good way. I wake up at about 6.30am and probably have one within 10 minutes of getting out of bed, which is pretty quick. I smoke between 15 and 20 a day, depending on how bad the day is.

It’s been worse lately. Three months ago, my partner at the time assaulted me and I had to get the police involved. He’s gone, but definitely, 100%, the amount I was smoking through that time was so much more than what I would smoke on a regular basis. I’m still going through court. I’ll get a phone call saying, “You have to come in and give evidence.” It’s a lot of extra stress.

There are some mornings I wake up to the children all through the house screaming and fighting with each other and I think to myself, I don’t even want to get out of bed to go and have a smoke – I just want to have a smoke right now. So, definitely, times of high stress exacerbate it.

I quit for about 2 months, but I didn’t like it. Does that make sense? I had absolutely no money to be able to buy any smokes or anything else to help me. I’ve got 4 children. Their needs come before anything else. If I don’t have the money, I just can’t buy smokes. And that was why I gave up ’cause it was obviously something I couldn’t afford. I was just like, well, this is how it has to be.

I went cold turkey. It was difficult. I experienced cravings and irritability and being grumpy. I had a few mornings where I was really, really bad and I’d feel quite sick. That’s why I think I went back to it after a couple of months. I realised that I just enjoyed smoking more than I liked not smoking. I actually got quite sick in the beginning of starting back up and then everything came right.

Right now, if somebody gave me a valid reason why I should quit, or another option, something I could do instead, I would be willing to try it. Otherwise, I’m like, why?

They’ve approached me time and time again about quitting – you should do this and you should do that. I’m the type of person that if somebody tells me I should do something, it makes me not wanna do it even more. I’m a bit of a stubborn one, ha ha.

I’ve told them to leave me alone about it. I said to my doctor, “Look, I’ve given up before and I didn’t like it. I didn’t enjoy it. I wasn’t happy. I’d rather be happy and just, like, even cutting back would probably be beneficial.”  So, he wants me to do that. I said “Okay, I can try that for you, if that’ll make you happier. But, just let me be is the better option to get me to quit than to keep bugging me about it.”

I said, “I didn’t want to come in here and have you tell me you want me to stop doing something – especially if it’s something that I don’t see as affecting my health that badly” – ‘cause all my health tests and things come back fine.”

Then he was like, “Okay, I’ll leave you alone about it until you mention it.” And I’m like, “That’s a good idea.”

I haven’t seen any stop-smoking ads on TV, not at all. To be perfectly honest, the non-smoking ads, even the pictures on the cartons of cigarettes – that does absolutely nothing.  You look at it and you’re like, that’s a gross picture.  Or you look at the ads and you’re like, that’s a bad ad.  But no matter how personal it is, they really don’t do anything to make me think, oh I should quit.

I’ve tried vaping, but I just never found a juice that gave me the same relaxation effect that I feel from smoking that first smoke of the day. It stopped the cravings. I didn’t feel like having a smoke or anything, but there was something missing about it. It didn’t give me that nice relaxing, calming feeling that I enjoy about smoking so much, that brings me to a place where I’m happy.

Because I still craved that first cigarette of the day, I would still end up going and having it. So, I’ve used them both – smoking and vaping, and I’ve tried just vaping.

I heard they’re changing the law so that you can only get tobacco and menthol flavours and you can’t get any more fruity flavours? If you’re still gonna be able to get the fruity flavoured ones through specific vaping shops, that’s a really good idea. That way, they’re taking it away from being that accessible to younger children.

I have once. It’s meant to be illegal to buy from other people, but somebody offered me some once. ‘I grew this in my backyard, here have a try of this.’. I did not like that one bit. It just made my throat dry. It was almost like my throat was feeling like it was bleeding.

There’s no smoking inside. Outside or, in an absolutely worst-case scenario, if it’s the middle of the night and it’s pouring with rain and I’m awake for one reason or another, I will shut my room off and have a smoke in there. But other than that, not in the rest of the house, not around the children.

Banning smoking in cars is a good law. It’s definitely not fair on the children to have them forced into an area with smoking, especially in a car. Most parents that I know who smoke, they pull their car over to the side of the road, step out, have a smoke there.

I think that there’s gonna be a heck of a lot of people that are gonna get caught out. A longer period of amnesty would’ve been good, or have a lot of education on the fact that you cannot smoke in your car when there’s a child in there. A $50 fine is definitely going to be a kicker. I’m not sure whether a fine was the best option. But hopefully, it will deter them. Depends if it gets policed properly. They already have a lot of other things that they need to police properly, and running around after people who are smoking in their cars is just an added thing to deal with. Oh god, thinking about it ­– that’s gonna be difficult to police full-stop.

Every time that January mark rolls around, when smokes are gonna go up, I’m sitting here thinking oh, no, that’s just in a few months’ time. I get that they’re thinking, hey, we’ll just keep putting the smoking prices up and that’ll stop people from smoking. No, it won’t. No, it won’t. That’s not gonna stop people. I’m one of those few people who are like, why should I stop?  And there’s a whole lot of other people out there who are like, why should I stop? Even if it’s more expensive.

I’ve learnt how to budget to make sure that everyone has everything they need and then there’s a certain amount of money at the end of the month that is my smoke money for the month. I buy the cheapest tailies from a discount tobacconist. They work out to be about $2 cheaper, which does not sound like a lot, but it ends up being a large saving somewhere down the line. I buy them in one big go and then split them up so I don’t have to worry week to week about running out.

Lockdown (the initial lockdowns during 2020)

During lockdown, because we were so holed-up inside a lot, I would end up using my vape a lot more, especially on rainy days.  I would use my vape because I could use that inside and it wouldn’t affect anybody. But, I was still smoking my daily amount of cigarettes. I was using the vape more to top up what I excessively needed to try and get through.

I definitely took a hit financially with the lockdowns. That was mainly due to having all 4 of my children home rather than going to school. The school provides breakfast for them, so I had to buy extra food. Plus, everything just seemed to get more expensive.

I was still buying smokes, but I had to buy everything in the supermarket which did make it more expensive for me. During lockdown, they don’t let you buy things in bulk. You can only buy like 2 packets at a time. Then I would have to make sure that I had some for every single day.

If somebody’s gonna smoke a little bit of weed, go ahead. As long as it’s not affecting you and yours, then who cares? Drinking is probably a far worse habit than smoking or weed.

The only thing that I particularly care about is it being a lot easier to get medicinal access for people who need it. Two of my young children have autism. CBD oil could help them, and it can do the same for things like epilepsy. But, the doctors’ options are to put our children on a whole lot of abnormal drugs that are gonna hurt their bodies.

I’m disappointed in the way New Zealand voted for the sake of medicinal purposes only. But then also, if that’s what the country feels is the safest option for the country, then that’s fine with me too.