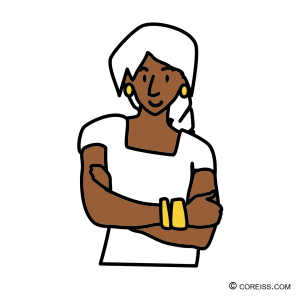 Wairere is a 34-year-old Māori woman living in the lower North Island. She lives with her partner and three school-age children.

I started smoking when I was about 16. It was like a high school social thing. So, I’ve smoked for 18 years.

My smoking went up once I got a job.

I smoke rollies – probably 15, easy, a day. I start about half an hour after I’ve woken up.

I have tried to quit about 3 or 4 times. I’ve used patches and the gum. I didn’t like the gum. The patches helped but because my partner smoked, that didn’t help. I just went back to smoking ’cause the temptation’s right there. The last time, I bought a vape to try and get off the smoking. That didn’t help – it just tasted like fruit.

These are the more recent times when I’ve tried, because my mum’s been diagnosed with cancer. So, I’m trying to cut back a bit. She’s doing really well now that we’re on top of getting her medication and treatments. Initially I probably smoked more than 15 a day ’cause I was stressed and researching things, trying to find out other ways to help.

My mum always tells me that I should quit. Smoking’s not worth the long-term health effects.  She’s an ex-smoker. She’s been given up for, like, 10 years-plus now. She always says if I can do it, you can.

My sister is her carer, and she smokes, and we’ve talked about giving up ’cause of Mum’s health. She’s tried it before. She said the patches worked for her, so that could be an option for us to try and, obviously, exercise – that helped her a lot. I think it’s all about distraction so you’re not thinking about it, and then, obviously, if you’re exercising, you get endorphins and stuff like that. But we haven’t put anything into place yet.

I haven’t seen any stop-smoking campaigns. But I don’t watch a lot of TV.

My doctor has brought it up a few times, but I think he’s just given up ’cause I’ve said no, I don’t want to quit yet. They’ve got a smoke-free health provider and stuff at my doctors that can discuss options with me, so he’s offered that. He knows our family really well, so he’s like, “If your mum can do it and she’s been smoking for like 40 years and she quit 15 years ago, you guys can do it”, you know.

I actually smoked less during lockdown. Which is surprising for me, you know, being at home with the kids and that. They kept me entertained, doing activities with them and stuff.

I’ve tried 3 different vapes and then I tried a range of different juices. It just didn’t work for me. There’s ones like crème brulee and stuff like that I tried. There’s chocolate ones and lots of like berry-flavoured ones. Depending on which one I used, I couldn’t inhale too hard like you would with a cigarette, ’cause it makes you cough ’cause of the strength of it. I think that I thought it would resemble smoking and it just tasted like something fruity. I even tried the tobacco one and that wasn’t the same. I didn’t get the same hit off it, or relief.

My partner was the opposite. We tried it at the same time and it worked for him. He had the tobacco one and he felt like that gave him the same thing as a cigarette. He stopped for like 6 months. But then he started smoking again because I was smoking around him all the time, and it was easier for him to just do that.

I have tried home-grown. It was half the price but it was a bit too strong for me.

We don’t smoke in the house or car.

The ban on smoking in cars with children there - that’s a good initiative. I just don’t think it should be around kids at all ’cause they don’t have a choice. I think the ban will help. Just driving around, I’ve seen people smoking in the car with their kids in there. It seems to be quite common. When I was growing up, it was normal for parents to do it. Some people are taking it seriously, some aren’t. I haven’t seen anyone being punished for it and I’ve not heard of anyone being pulled over for it or anything like that. I don’t even know what would happen if the police saw people doing that. Would they pull them over and they get fined?  Like, is there a clear consequence for it? I don’t know.

I definitely notice the tax increases. I think the prices are quite high. I guess they’ll just continue to rise to get people to possibly stop smoking and be smoke-free.

I just go straight to the tobacconist. They’re cheaper and they have more of a variety as well. Though, some of the cheaper brands that we were buying are no longer available. We’ve had to change brands. They just said they no longer supply it, or something like that.

It’ll be good I suppose. I’m trying to get my partner in on it at the moment, ’cause then we can cut back on our smoking.

I’ve definitely noticed that attitudes have changed a lot. Like, a couple of my friends have given up and they vape now. But they quite often, you know, say things that sound judgemental and I say, “But hey, you used to smoke, c’mon now.”

I was all for it. I did like that they did the referendum though. It sort of opened up that conversation with everyone.