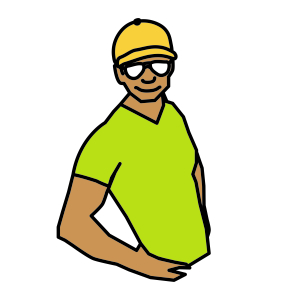 Maka is a 34-year-old Māori man who lives in Auckland. He has a partner and is a father. Maka has a fulltime job and works long hours.

I’ve been smoking about 17 years. It’s gone up recently. Before I was smoking 30 grams a week – super slims. But the past couple of weeks, I’ve been having tailor-mades, probably about 4 packets a week. Maybe 15 a day. My first cigarette is pretty much straight away, really. I think it’s just with everything that’s been going on. With all the stress and stuff that’s going on in my life at the moment, it’s quite full on. It’s painful, so I’d rather not discuss it. My partner, she’s never smoked, but over the past week even she’s had a couple of cigarettes.

Yeah, it’s a bit of a dent in the wallet.

I tried cold turkey once. I thought it would help with my sports. That lasted about a month. I’ve tried the patches and stuff like that. I’ve tried those sorts of things to try and narrow me off. That was a few years back, but I pretty much failed at that and the gums as well. I just couldn’t stand the taste of it.

I’ve tried vaping on the odd occasion, but yeah, it just wasn’t for me. It tasted like flavoured oxygen. I think it was like a Red Bull flavour or something like that – something red. It would’ve been about 5 or 6 months ago. My mate smokes the vape and he’s more about blowing out big clouds and stuff like that. But I don’t really get anything out of it. I don’t mind other people vaping. That’s their choice. But for me it’s like, nah, I’d rather have a cigarette.

I’ve tried some Tongan tobacco, but it was quite harsh. So yeah, that’s the only sort of homemade tobacco I’ve tried.

We’ve never smoked in the cars or the house. That ban on smoking in cars with children under the age of 18 – yeah, that’s a good law.

I have heard of Smokefree 2025, but yeah, I think that’s just wishful thinking, to be honest. I know a lot of people have started turning to vape, but there’s too many people that have been smoking for too long to just turn to vaping. People’ll just start growing their own cigarettes. That’s what I would do, I think.

I didn’t actually vote on that. I don’t smoke it myself but each to their own in my opinion. But I would’ve been against it being legalised, just because I wouldn’t want my kids being exposed to it legally.

I’ve had my teenage daughter come and stay with me full-time now. Yeah, she’s been a bit of a handful. But it’s all good now, everything’s going all right.

I am still smoking. I’ve actually slowed down a little bit. I’m only smoking 2 or 3 a day now. That’s about a packet of 25’s a week, of tailor-mades. I don’t really have a ciggie as soon as I get up. It’s more like about an hour and a half, 2 hours after. Yeah, it was just really the pricing and all of that – it was $68. I get the cheapest ones now too. Whenever I go to the dairies, I ask for the cheapest 25’s rather than a particular brand.

I might’ve seen some ads and stuff like that, but I still just blank out really.

Proposal that tobacco should be sold in pharmacies

Ultimately, I’d love to be giving up cigarettes. That’s why I’ve lessened it, with the cost and all. I’d love for it to be harder to access for my kids when they get older. I’m for it if it’s gonna make it harder for my teenagers to get smokes and that. Even if it was harder for me, it would be better for my kids in the long run.

If cannabis was legalised, where should cannabis products be sold?

If cigarettes are going to be sold through the chemist, I guess then the recreational drugs would have to go through the chemist as well. That’s what I’d assume would happen. Or we’ll end up having places open up, like vaping stores. I wouldn’t sell them in alcohol stores ’cause I reckon it’ll just give the people that are robbing the dairies more opportunities to rob the liquor stores for liquor, recreational drugs and cigarettes as well.

To be honest, I’m enjoying the time with my kids ’cause I don’t really get to. Usually, I’m up early in the morning and I’m gone til late. I’m doing all the schoolwork with them. It’s been challenging, but it’s been pretty cool.