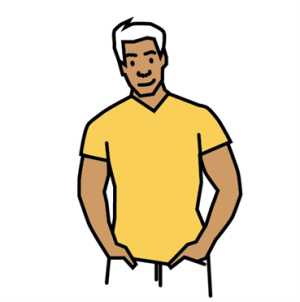 Mana is a 29-year-old Māori man who lives in South Island. He has a partner and is currently working in a mine.

I started smoking at 16. A lot of friends and family around me smoked. I just tried it and I liked it and just carried on.

I don’t remember dad smoking, although he did smoke a lot – like two 50 gram pack a week and a packet of tailies a day, back when they didn’t cost anything in the good old days. My mum smokes.

We’ve just moved back in with my mum and dad. My dad vapes, which is not really smoking. We smoke outside – it’s just courtesy. If it’s just me and Dad he might vape inside, and I’ll have a few vapes.

I’m currently OP smoking – ‘other people’s’, ha ha. It’s the best way to smoke nowadays. So, I’m really only smoking a few rollies every now and then. If it’s all right with ‘the boss’ (my partner), sometimes I’ll buy a packet of tailies from supermarkets or mainly I buy from servo’s. But usually, I just smoke with people at work.

I went through a pack of tailies the other night. I was drinking. If I am smoking, in a day I’d probably get through 25 rollies. I use super-slim filters. First smoke of the day would be about 30 minutes after I roll out of bed, get dressed and make a cup of coffee.

I quit for a few months once. A Māori group here helped me. I can’t remember the name of them. It was just like patches. They said I could have lozenges or stuff like that as well, if I wanted. But I hated the taste of the lozenges and the gum. I chewed chewing gum, like normal gum, instead. Then, at Christmas time I started up again.

My partner wants me to quit, which makes it hard to quit because I like it. I want to smoke still. She doesn’t smoke. That’s why I’m only really OP smoking. I personally don’t really want to stop. When I did, I wasn’t making a huge amount of money but I’m on pretty good money now, so that’ll help. So, she said, “If you can do it, you can do it, but if not, righto.”

My uncle was told, “Don’t quit smoking.” He’d tried quitting and had a heart attack, and the doctors were like, “Don’t quit – we don’t want you to have another heart attack. Don’t smoke millions, but just keep smoking.”

Driving round, you always see people offering to hypnotise you to quit and stuff like that. Every time I go into the doctor they ask, because they’re obliged to ask, if you’re a smoker. And if you say yes, they’re obliged to tell you about Quitline and say they can give you patches if you want. But that’s it.

About 5 years ago, I vaped for a while. It was just one of those pen vapes with changeable coils. I got the strongest one there was back in the day, which was only like 10mg, or not even that. But I found I was just constantly vaping. It was annoying, like bad, 'cause I could vape even when I was working because I was in a workshop. So, I was constantly doing it. It didn’t have the same effect as a cigarette. I could have a cigarette and be as good as for ages but, yeah, I was constantly on the vape. I heard a saying – it’s sort of like feeding a meat-eater tofu. It’ll fill them up but it’s not quite gonna quench it.

A sheila where I grew up, grew it. She grew her own tobacco and I tried it. I want to get seeds so I can grow it.  I just don’t know where to get them. I’d like to try flavouring it and adding different flavours and shit.

The ban on smoking in cars with people under 18 present – yeah, that’s fair enough. I knew it would be under the age of 18. But giving a fine to someone because a person, like a 16-year-old who smokes, is there – that’s ridiculous. It’s a hard one because a 16-year-old who doesn’t smoke, I’d probably get out of the car to have a cigarette. If it was a 16-year-old that smoked, then I’d probably have a cigarette in the car.  It’s hard to draw a line because there are a lot of different circumstances. Obviously, you’re not going to smoke in a car with someone 13 or younger at all, probably even 14 and younger. But if they’re already smoking and they’re like 15, 16, 17, 18, then I don’t see why you can’t have a smoke in the car.

Applying it to vaping as well – if it’s a form of smoking, you should probably do it in the smoking area. Not everyone does. I’m sure vaping probably doesn’t have the same amount of chemicals and stuff in the vapour as smoking does, but it’s still common courtesy for other people.

The price – it pisses me off something chronic. The amount of tax we pay on cigarettes is through the roof. It’s ridiculous. In Canada and the States you can get the darts cheap as chips. A 20 pack of tailor-mades is $9 or something. It’s even cheaper in Ireland. And we’re charged $30 for a 20 pack. It’s a little bit of a high mark-up!

They should strip the tax back down. They’re getting a little bit gung-ho with that. All they’re trying to do is price people out of smoking. And all it’s going to affect are the people who don’t make much money, or if they’re on a benefit.  It’s going to affect them more because they’re addicted, so they’ll still buy smokes and they’ll have less money for food and all that sort of shit. That’s not the way to do it.

I know of Smokefree NZ, the standard campaigns they usually run.

I hate the idea of that Smokefree 2025. It’s exactly why I voted ‘No’ on the marijuana referendum. I don’t know where they came up with the idea for it. I just think it’s ridiculous – they wanted to legalise marijuana, but they want to make smoking cigarettes illegal. So, you can’t have a cigarette which doesn’t actually affect your cognitive ability, but you can get stoned if you want to.

It’s not that I think the Smokefree 2025 is not achievable. They can stop bringing cigarettes in any time they want, and they’ll achieve it. But I don’t think it’s moral. I don’t think they’ve got a leg to stand on to do something like that. We all pay taxes. We all pay into the public health system.

I started smoking fulltime again. I just wanted to ’cause I enjoy it and the Mrs finally agreed to let me. I work 13-hour days and I wouldn’t mind being able to have the odd dart throughout the day. I drive diggers and dumpers all day, so I can smoke whenever I want. So, I tend to smoke a bit more when I’m at work than when I’m at home. My first smoke in the morning is after I’ve made a cup of coffee, within about 20-30 minutes.

I go through about a 30 gram a week. I prefer rollies, with super-slim filters and yellow Zigzag papers. My uncle drives trucks, and he used to use king-size filters – the big ones – and he’d roll big, fuckin’ trumpet cigarettes, ha ha. I’d be like, “Fuckin’ hell, they’re big darts, aye.”  He’s like, “Yeah, lasts me an hour or 2 though.” Papers must’ve only just met when he packed them together, ha ha.

No, not by choice.

I’ve talked to a couple of guys who grow it. There’s one who only grows pipe tobacco, so I can’t get seeds off him. So, I’m gonna order some. But he’s the guy we’re getting everything we need to know off. I’m keen to give it a crack. It’ll be interesting. I’m quite looking forward to trying the base flavour of the tobacco to see what that’s like, and then start trying to flavour it.

I’ve just been to the doctor ’cause I rolled my ankle. It was strange ‘cause they said, “You rolled your ankle. Are you a smoker?”  And I said, “Well yeah, but, you know, I didn’t roll my ankle ‘cause I was smoking, ha ha.

My wife’s a nurse so I know they’re required, every time, to ask about their patients’ smoking status and if they’ve thought about quitting.  As a doctor you wanna get a full sense of your patient, so it’s not too bad – but it’s a bit strange ‘cause they don’t ask how often you eat McDonalds? Usually, they ask if you’ve thought about quitting or if you’ve tried, or if you need help and Quitline.