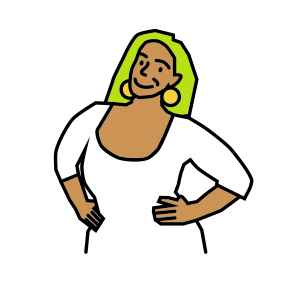 Anahera is a 45-year-old Māori woman living on the east coast of the North Island. She lived in Australia before returning home. Anahera is married with four children aged between 9 to 17 years.

I tried smoking when I was 16 but didn’t really like it. At 18, when I became legal, I started smoking.

My mother was a smoker, and she still is, and would smoke in the house. She would have friends over often, and they all smoked. It was the norm back then in the early ’80s. We also had lots of family gatherings where everybody smoked. My older female cousins kind of pushed it on us who were younger. You weren’t a woman if you weren’t smoking. That really began it for me.

From the age of 18 to about 30, I smoked about 10 tailor-mades a day. I lived in Australia for most of that time. When I came back to New Zealand, everybody was smoking rollies. I thought they were a bit beneath me, ha ha. I thought they looked disgusting, ha ha. But then, you get used to the culture of it. I found they would last me longer. So, I went onto rollies – menthol.

Since having my children my smoking has increased. I’m probably at maybe 25 a day now. It used to be a good hour before I would have a smoke. In the last 3 years, when I get up I’ve got to pretty much have a smoke within the first half an hour. I’ve got to have a smoke before I go to bed.

After I had my children I thought I’ll get back into the swing of work. I had enough work history. When I was in Australia it was easy to get a job. It was less competitive. Here – I found it was so much harder. I would get an interview but that’s as far as it would go. I thought partly it was because I had children and employers thought people with children are more likely to take time off work.

It could have been other things. Here, it’s who you know. Like, you go for a job and you don’t realise you’re in the bloody interview with the boss’s niece or something. You’re competing with someone who has family members inside the organisation. I got to the point where I thought I’m never gonna get there. I just ended up feeling like I didn’t have a show of getting a job and I got quite depressed over that.

So, I went cleaning instead. Not that I’m saying that’s a bad job, it’s a great job, but the pay’s different. After years here I had to create my own thing and start my own business.

Most people I know who smoke are people that are dealing with trauma and the angst of life, like getting rejected over and over again. I’m not just talking about the rejection of being inside of the Western system and dealing with racism and bigotry. I’m also talking about how it is inside of our own Māori society. How people in power and control trying to bait people into arguments. Smoking is a remedy, it’s a quick fix. I think at the heart of it, it helps people deal with trauma.

I’ve tried to stop smoking many times, too many to mention. My first attempt was cold turkey. That was just prior to having my firstborn. When I found out I was pregnant, I went cold turkey. I failed miserably at that. I lasted only like a month. I had cold sweats and all sorts.

My other attempts were with Champix. I went to the doctor. My girlfriend and I decided to do it at the same time, so we went and had a full health check-up from blood pressure to going to see a ‘gynie’ and just doing a whole lot of blood tests. It was supposed to motivate us to go as healthy as possible. The doctor recommended these tablets. Part of the reason for that was ’cause I had a lot of anxiety around it. Although I was talking about giving up a lot – inside me, my brain hadn’t quite caught up with my mouth.

There were too many side effects with Champix. I had headaches. So, I wasn’t all that successful on that either. I probably only lasted a month and then failed again.

I’m aware there are quit-smoking programmes ’cause they’re usually advertised at the doctors’ with pamphlets and things like that or at the hospitals. I’ve not actually used them.

About 10 years ago, hearing the doctors talk about smoking to you all the time was common to me. They would say, “Look, have you thought about giving up smoking?  I see that you’re smoking and you’re still smoking, have you thought about quitting?”  But where I’ve moved to I haven’t heard a doctor say that yet.  It’s pretty much got to be prompted or initiated by me saying, “What do you think about me giving up smoking? What services would you recommend for me to give up smoking? What products would you recommend?”

I have about 3 different kinds of vapes in my house. I think you have to get the right type of vape first off. The vapes that I’ve got, they’ve got like an oil taste. It’s like you get left with a residue. So yeah, they kind of turn me off.

It’s overwhelming, too, when you go to a vape shop.  There are so many different brands and whatever else. All you want to know is that it will feel like and taste like what happens when I have a cigarette.  I don’t want all the variety – one will do me.

Many of my friends are opting for vaping and they’re doing really well on it. They haven’t smoked for over a year. I think it’s absolutely possible to switch to vaping. But I don’t think I’ve really put my mind to it.

When I was living up north my husband and I had parted. I had my youngest and my older three were living with my husband. With the amount of stress and missing my children a lot, I was smoking a lot more, and I couldn’t afford it. So, a friend of mine said, “I’m growing it, do you want me to harvest some for you?”  I said, “Oh yeah, that would be great.”

I found it harsh. I was like oh my gosh! But it was absolutely much cheaper. She was able to do it in ounces. That would last a whole blinkin’ couple of months and because it was so strong too I didn’t like smoking them.

I haven’t tried blackmarket cigarettes. A friend of mine bought some scented tobacco smokes from an Indian shop. They tasted like strawberry and I thought these are bloody awesome. I don’t know if it was blackmarket, but that’s as blackmarket as it got for me, ha ha.

I absolutely agree with banning smoking in cars. I’ve seen some of my uncles smoke in their cars while they have children in the car. I’m not a nice person when I see things like that. I turn quite ugly quite quick. I’m like, “What the hell are you doing? Why are you smoking while you’ve got tamariki in the car?”  They’re like, “It’s all right, it’s my car.” And I say, “What a sad, shit attitude to have.” The reason why is ’cause we were raised in the homes of smokers. If there’s anything that I can associate my smoking to, and the smoking of my own family members and cousins, it’s that – because it was so normalised.

There’s no smoking in our house or the car. Even when I was single, I never smoked in the house or in my car. I hate the congestion. It’s got to be outside or it’s nowhere. If you don’t smoke outside, well then, you can piss off.

I don’t expect people to try and hide away in a corner, but have some respect for other people

They could go further and ban smoking in homes. I know that’s a bit of a breach of people’s privacy, but when you’re out of control and a smoker like me and when your willpower is not great, then whether we like it or not it’s a reality for us that these sorts of legal instruments have to be used in order for us to toe a particular line.

I 100 percent agree with Smokefree 2025. If you don’t have it then you can’t buy it. It’s like me with my kids: if they can’t get the chocolate or they can’t get the wi-fi then they go without and they soon figure out that going without is not a problem. They adjust. I would be exactly the same I believe. I just think I don’t have the willpower. I don’t know how many years of smoking it’s taken me to just reduce it down. But if you ask me to give up smoking, it’s just not gonna happen – not while it’s still available.

The price of smokes in Australia was a lot less. But although I noticed how much more it was costing, smoking was such a part of my life that I could just kind of overlook it. Like it’s a necessity, like water, it had to be there.

My mother just told me she was giving up which I was quite shocked at, because she’s never said that. She said, “I’m giving up because it’s so expensive.” I’ve thought those thoughts for some time too. The expense far outweighs what we can handle. I’ve got to manage those taxes. It directly affects me and many people that are like me.  I don’t like that. I don’t think that that’s the way to achieve Smokefree 2025.

If we’re gonna go for that, go for gold, then that’s the way we should deal with eradicating smoking fatalities. But punishing people through putting on taxes – you’re punishing the little person at the other end. I would say increase the taxes for those taking them.

I was all for legalising cannabis, for decriminalising it anyway. I’ve got many family members that are users of cannabis and not for the reasons people think. Mostly it’s for dealing with trauma. I don’t see them as abusers. I’m not in crowds of people that abuse it to the extent that they smoke it all day, all night. And many of them are not tobacco smokers.

The people I know are one-off smokers of it because it gives them some reprieve. It’s really shit when people constantly say “What stress? You don’t have stress. Everything’s all good now. Everything’s acceptable and available to us. We’re in the land of milk and honey.” But that’s not the reality for everybody. My experience of not being able to get a job is a good example of that.

It didn’t affect us. It didn’t affect me mentally. I actually loved having my children and husband at home. I loved that whole experience. Going down to the superette, which is only just down the road from me, to get smokes was easy. But during that time, I wasn’t smoking as much. It’s the same on weekends when my children are home and even in the evening. It’s different from when I’m at work. The minute I am focused on my work then I’m smoking, smoking, smoking, ha ha.