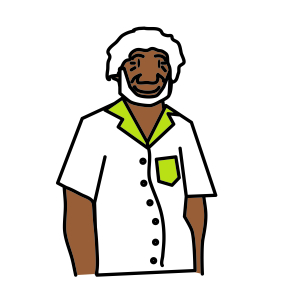 Sione is a 59-year-old Samoan man who lives and works in Auckland. He has two children and a partner.

I actually didn’t start smoking until I was about 31, 32, when the doctor told me not to play any more sports. I was working in a mail centre for the old New Zealand Post Office. There was a lot of people there that smoked. In that time, smoking was everywhere – inside, outside, yeah, and when you used to go out to the bar and the pub and have a few drinks after work – everybody was smoking. I think I got caught in that.

When I started, I was smoking tailormades. Even now I never use rollie ’cause I can’t roll a smoke.

I used to smoke probably 5 a day. Now, I just go to work, and I usually just have a smoke when I get home – if I feel like it. I don’t smoke at work. I don’t even take a smoke with me to work. I don’t have one in the morning either. I just wake up, get up and go to work. When I get home after work, I have a coffee or something, and sit outside. That’s when I grab a smoke and just sit there and say, oh, another day is over and just relax. It’s just a chill-out sort of thing. I probably smoke 3 a day now. I’m not a heavy smoker.

One thing that’s helping me not smoke too much, is not drinking. I don’t really drink now. The last 7, 8, years I probably have a drink once or twice a year. If I go out, I usually say, “I’m the sober driver.” When I used to go out with friends and drink, I used to smoke a lot then. I think that’s why I don’t have a smoke in the morning.

My partner, she’s the same, she doesn’t smoke at work. She only has 1 or 2 in the evening. And now she’s using a vape. I think she buys a packet of 20 and it lasts her 2 weeks. She only has a smoke when she wants a smoke. Most of the time I say, ‘Why d’you bother because you only smoke half a cigarette?’ Basically, she does the same as me, she never takes smokes to work. That’s the other thing, when we go somewhere else, we don’t smoke anywhere else, just at home.

I’ve actually got one as well. I use that more often now, but I don’t even take that to work. I don’t really carry that with me anywhere. It stays home, like my packet of smokes. I only use it at home. Instead of having a smoke sometimes when I get home, I use the vape. I switch between. I think I smoke 5 then, probably 2 or 3 times, use the vape as well.

I never sort of try anything but straight smoke.

I did stop for a while. When my kids came along, I thought, nah, I’m not gonna smoke around the kids.

I used Champix. I took one lot and I used that for a week and that was it. After a week, I stopped for maybe between 10, 12 years. About 9 years ago, I went through one of those things called split up and divorce. I was, you know, sort of down for a while going through that and the fight and all that sort of thing. About a year after, I started back up on smokes.

Only on TV. I remember some old ones. I don’t really watch that much TV. I only watch it when the sports is on.

I never smoke in the house or car. When I first started smoking, I used to smoke in the car. But when my kids came along, that stopped. I don’t like my vehicle smelling of smoke.

That law banning smoking in the car – I agree with that law completely.  I think smoking in the car should be banned completely whether the kids are there or not. Even if the kids aren’t there, it could cause an accident. What happens if you drop a smoke? You’re looking for something that’s burnt and your concentration will come away from driving the car. I think, why ban only that? Our weather here, when it’s summer, is so dry. With smoking in the car, what happens at the end? You don’t put it in an ashtray, you throw it outside. It’s not just only making rubbish on the road, but you could cause a fire.

I don’t mind them doing it, but we want to know where that goes. I do know that most of the tax on smokes is actually supposed to go to the health area, but I’m not so sure it does.

I know they’re trying to make people stop smoking by putting the price up. But that creates more problems, like people robbing dairies to get the smokes and all that sort of thing. Whether that’s the reason why they do it – because it’s too much, they can’t afford it, or not – I’m not sure. But that’s how I look at it.

The cost is not really a thing for me. I just feel much better when I cut right down. I’ve seen a lot of people chain-smoking. I don’t feel like I’m gonna see somebody smoke and say, oh I’m gonna have one as well.  I don’t do that. I just smoke when I feel like it.

I actually voted against it. For a start, I don’t use it. I tried once when my mates were around. I said, let me have a try, to see whether it’d do anything to me. It didn’t do anything. All I could see was these people laughing and I thought, why are they laughing? That was the only and last time I smoked marijuana.

Actually, I did a lot of walking and biking. I still had my routine. Instead of going to work I just went for a walk and pretended I’m going to work. It didn’t really change my smoking habit. I never had a smoke in the morning even though I was staying at home, mainly ’cause it was a habit of not having a smoke during the day ’til after lunch.

I'm very good – trucking along. I'm actually smoking way less now. I use my vape when I feel like it, and a couple of times I went a whole day without a smoke. I just don’t think about it, smoking.

Today I’m at home and I had my vape with me and I haven’t had one today so far. I think it’s actually quite good.  If you think I'm gonna have a smoke, I figure you just keep yourself busy and occupied. At the moment I'm doing a crossword, so I'm not thinking about anything, I'm trying to finish the crossword. I do it every day – keeps the brain ticking.

Before, a packet, it probably last me a week. Now, a packet sometimes last me nearly 2 weeks, so it is quite good. Sometime I have one after dinner, you know, when you're gonna eat too much, you go oh shit. After dinner or when I have a coffee.

I'm actually just fading it, nice and slow. Hopefully before the end of the year I’ll probably go without it completely, that’s the aim. Then hopefully, I'm gonna stay strong and not to take it up again. I've gotta commit myself to giving it up completely.

I'm actually use my vape, quite a lot if I feel like a smoke, I use the vape instead of having a smoke. I use it regularly. It’s not like you're sitting there pretending you're having a smoke – I usually have a couple of puff and that’s it. I use the one that’s uses pods. You buy a packet of 2 for $20 and used to be they last me about 4 weeks, or a whole month. The one I'm using, it’s very light.

My partner, she’s on vaping all the time now, so that’s the other thing that help – she doesn’t really have any cigarette at all. So, the pressure’s on me to give up, ha ha ha. It helps with her giving up completely, it’s down to me now. So, hopefully soon.

It’s not really the price that bothered me. It’s just, I walk every day to work and I feel quite good.  So, what's the point of doing all that walking if you’re huffing and puffing. And I'm back into my golf again. I'm not that bad at golf. I used to play in a six handicap, so I'm a very relaxed golfer. I enjoy the walk, I enjoy playing. You can't blame anybody else but yourself when you're playing golf. And I enjoy fishing. I love the water. It’s relaxing. Sitting in a boat and make sure they're full of fish – I'm very patient person on fishing.

I was watching the news, how they're gonna go for changing smokes and everything.

Changing the accessibility of tobacco

Supermarkets and I think there’s places they gotta need a licence for it, eh? It’s gotta be a licensed shop.

I hope it actually work out better and will change people’s attitude to it, because there’s quite a lot of young ones lighting up.  There’s always gonna be a positive and a negative, but let's be positive here and let's hope it’s gonna work.

What if there was only low-nicotine tobacco?

So hopefully by the time they change it, I don’t have to be worry about that stuff.