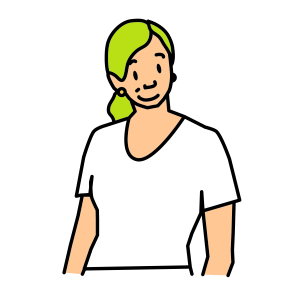 Laura is a 36-year-old Pākehā woman who lives with her partner and 8-year-old daughter in a coastal town in the North Island. Laura recently became a nana.

I started smoking rollies when I was 14.  I was stealing Dad’s at first – just a few a day. Then, once I was working part time, I went to buying my own.
I was working full time by the time I was 16 and a half. From then I smoked probably 20 to 30 a day. They were a hell of a lot cheaper back then.

Even now, I smoke the minute I wake up. I go to the loo, go for a wee, flick the jug on, go out and have a cigarette. Come back in, make a coffee and then go have another one.

My dad always smoked and still does today. My mum gave up when I was probably 14 or 15.

I did try patches through Quitline when I was 18 or 19. I rung up and spoke to them, but I never did anything about it. I got the stuff but never used it. They did follow-up phone calls and stuff. I can’t really remember – I think I just decided to stop answering the calls.

I did cut down while I was pregnant, but I didn’t quit. I probably went down to 5 or 6 a day, which was a huge drop. But the minute we came home, I was back into it.

We all say, oh yes, we’d love to quit. But no, like, let’s be honest – I could say to you, hey look, I would like to. But realistically it’s not gonna happen.

I’ve seen the Quitline ads on TV. I think if you wanted to stop smoking, the support’s there.  I don’t know whether they offer vapes as an alternative to quit.  I think that would be something that they could look at doing - whether they subsidise them or gave you information on them. My other half vapes so I know about it, but if you didn’t know about it, I think it would be good to be told.

I went on a vape for about a year, about 4 years ago. My other half vapes. He went from being a heavy smoker to vaping overnight – decided one day that he didn’t want to do it anymore and he didn’t. So now I’m the only smoker in the house.

People have different attitudes to it. Some people say it’s a better way to go, other people are like, oh, it’s just as bad. At the end of the day, you’re still putting something bad into your lungs. But I still think it must be better for you than tobacco. I think there’s 3 or 4 chemicals in vape juice as opposed to hundreds or whatever it is in tobacco.

I did notice a change when the vaping law went through. I went in to buy vape juice for my other half and my daughter had to stand outside the shop, on the street corner. However, at another vape shop down the road, they didn’t care.

I’d be too scared to buy blackmarket tobacco. We did try growing our own once when we lived on a farm. But we had a goat and it didn’t work, ha ha.

I smoke outside. My other half vapes inside, but it doesn’t bother me. It’s a sour apple/cherry flavour and it’s actually quite nice smelling.

It was funny – about the car thing – I think the ban had just come in and I think it’s a brilliant idea. I’ve got a new car and so I don’t smoke in my car, but I did use to in my old one.

The price is absolutely disgusting. It’s so expensive and I think they are hitting the people that can’t afford to be hit. They’re attacking the people who don’t really need to be attacked at the moment.

Their idea of let’s put the prices up to stop people smoking - I don’t believe it’s gonna work.

It costs me $60 something for a 30 gram of rollies. It’s over $100 for a 50 gram. And I buy 2 a week. That’s horrendous! That’s over $6000 a year! I do our family budget and I do the finances and everything’s to the fence. I know where all the money’s going. My other half’s on an injury benefit, so we’re a low-income family with 1 child at home and he’s got a child. I’ve just become a nana. I suppose we’re probably a typical Kiwi family. Everything’s hard cost-wise.

And when you look at it and you think oh my God, I’m wasting $120 a week on tobacco, it’s absolutely disgusting, ’cause you are literally burning it. It’s shocking. It’s quite horrific! If I was gonna give up, the one thing would be the cost.

I probably smoked more because I couldn’t work. It wasn’t due to stress or anxiety or anything like that. It was just that I was home. I smoke double on the days that I’m home compared to when I’m at work. I work 3 days a week and I don’t smoke at work.

I think it should’ve gone through. It’s a natural product, grown from Mother Earth, and if people want to smoke it for pain relief or for whatever, they should be allowed to. I think it should be legal. I’m quite gutted that it didn’t go through. You’re allowed to buy alcohol and you can drink and that is man-made, it’s commercially made, not natural.

I smoked it in the past. I tried it but it’s not my thing. I couldn’t move on it, it just puts me to sleep. Whereas, I know people, you wouldn’t even know that they’ve had a smoke. But I think they do need to have some kind of way to monitor its use, and there need to be rules around that.