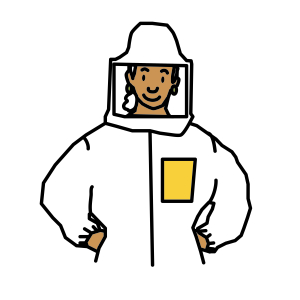 Miri is a 36-year-old Māori woman who lives in the central North Island. She works as a beekeeper and has a partner and 2 children.

I had my first cigarette at school. I must’ve been about intermediate school age.  I was with my friend on the field, and I guess the more we tried it the more regular it became. I was smoking from that age until now.

My parents smoked. Inside the house and inside the car. I just got used to it. They both smoked up to their last day. All my siblings smoke.

I’d say I smoke 5 to 10 tailormades a day. I start in the morning, within 30 or 40 minutes of getting up – with my coffee. I smoke after eating, after dinner, and maybe if we’re travelling a long way, you know, when you’re driving you usually have a cigarette going.

I don’t smoke as much when I’m busy or at work. I think it’s ’cause you’re too busy and there’s no time to really sit down and enjoy one. At work, I just have one at lunchtime. I smoke more at home.

I did stop when I was 24-ish. That’s because I got pregnant with my first child and that made me stop. Because it was my first, you kind of feel cautious, ’cause I hadn’t experienced it. So, I thought, I’m going to stop smoking, and I did – cold turkey. It was easier than what I thought it would be at the time. I thought it might be quite hard, but I think I had the right support around me at the time.

I started up again when he was about maybe 2, and I’m still smoking now. There’d been some, like, family problems, losing siblings and parents. The cigarettes kind of helped in some way.

When I got pregnant with my second child I was offered the patches, but that kind of fizzled out. I had cut down anyway, way less than I had been smoking because I was sick throughout my pregnancy. I had patches and lozenges. I just don’t think I stuck it out because I was quite sick, so I didn’t smoke much anyway.

I have heard of Quitline, but I haven’t used them. Maybe way at the start my doctor asked about smoking, but I’ve had the same doctor for quite a long time. The midwives I had, asked if I was smoking and they offered, like, lozenges, or an advocate like a quit-smoking person they could do a referral to. That’s how I got my lozenges and stuff – through that referral. That was at the hospital when I got my scan. They offered services like Quitline. I did take up the referral to a big Māori health place. It kind of got left there. Nothing else has been brought up about it since.  Not that I go to the doctor much.

When I got pregnant with baby number 2, I tried vaping. I’ve still got it. I did like a mix of vaping and cigarettes for maybe 5 months.

I tried cherry, vanilla and a coffee flavour, and I played around with the strength. It was, like, quite weak and then it was too strong. It took a long time to get used to it. You know, you wouldn’t inhale it like a cigarette.

I just didn’t enjoy it as much, compared to a cigarette. It didn’t feel the same. I think because you had it in your hand it felt like you had something to keep you busy, but it didn’t have the same satisfaction as a cigarette.

I haven’t used it since then.

At home, I smoke in my garage which is outside. And I only smoke in the car that the kids don’t go in. I’ve got 2 vehicles – one’s the family car that’s no smoking, and the other is a smoking car. When I had my own kids, I reminded myself of what it was like for me when my parents smoked in the car.

I’m totally all for that ban on smoking in the car, because we grew up with parents that smoked in the car.  So, I’m totally supportive of that.

The attitudes towards people who smoke, can get you down. If it’s people that know I smoke, then I generally won’t care if I smoke really close to them. But if it’s someone that I don’t really know, I might be thoughtful and kind of go into a corner, or not smoke as close as I would with people I know. I have had that, like, just a change in their body language or they mutter something under their breath. I just guess that they don’t smoke because a normal smoker wouldn’t care.

The cost has changed over the years. It’s quite a big jump from when I first started. I don’t know, if it was to go up more, if I’d probably still smoke. The cost doesn’t really affect me at the moment.

If I go somewhere different and there’s a bit of a price difference, I’ll get a cheap packet just for that one time. I’m not far from a dairy, which is my usual place to get it from. But where my beehives are, which is not in town, my brand is $6 more. It’s ’cause they’re the only shop and there’s no competition. I only go there if I’ve got no cigarettes. People out there are gonna buy it though, because there are no other suppliers.

The goal to make New Zealand Smokefree in 2025 – that got taught to me at the Māori health place. I remember them speaking about it, ’cause I got a jersey with that printed on the back.

When I heard about it first, I thought that’s not gonna happen. We’re kind of close to 2025, and yeah, I don’t think it’s gonna be totally successful by 2025. All the people I know who smoked, are still smoking.

I think cannabis should’ve been legalised a long time ago. I did vote yes to that referendum.

I’ve just gotten better, I’ve been sick. I’m now having my first cigarette. When I’m sick, I don’t smoke, because I don’t enjoy it. It was a head cold, but still enough to put me off smoking during that time.

I think my smoking is still the same. I haven’t changed or cut down. On average, maybe I smoke 10 a day. I don’t count, but it’s not like a whole packet.

Beekeeping is quiet during the winter, so it’s, like. preparing for summer. I smoke more when I’m not at work or keeping myself busy. You don’t have a chance to grab your cigarette and light it, but now I’m at home I smoke way more because I’ve got the time too.

Sometimes the shop doesn’t have the brand that I smoke, so I usually just go for something around the same price that they have available. I’m not complaining. I know they’re expensive, but it could be way worse and I can still financially afford it.

I come from a coastal area, and we’ve only got one shop. Because there’s no competition in sales, they’ve got a high price on all their items they sell, and cigarettes is one of them. They only have selected brands, so the prices are way different, and their selection is smaller. I usually get my supplies in town.

I was vaping for a bit when I was pregnant and my partner tried it then too, but we’re both back to smoking. It wasn’t for me – it worked at the time, but I gave up on that.

I think they’ve given up trying to encourage me to use patches or anything.

Low-nicotine cigarettes
Is that a definite or a maybe? Oh wow – are they going to make nicotine-free ones? So how would that work with pricing a packet, if the levels are going to be different? Would that be the same pricing? Like vaping has the different levels of the nicotine, so will cigarettes be coming out like that too? Oh, I hadn’t heard of that before.

Banning filters
Oh wow. Would that be because it will likely make people stop because of that?

Banning dairies and petrol stations from selling tobacco or cigarettes
Oh, that’s another good one.

Banning people that were born after 2004 from buying tobacco
Oh wow, ever? That could work, maybe. Wow, I haven’t heard of any of them. Oh wow, cool – well, not cool.